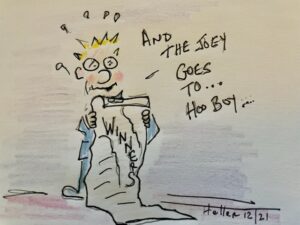 Let’s get to it, shall we?
There has been a great deal of discussion this year – and this week – about Awards and Awards shows. Let me say a few things at the top to clear up any confusion about my take on all of this:
1. I love awards. Particularly if I am the one winning them. Most of us prefer awards when we win them, and this is why no one really likes Scott Brick or Simon Vance.
2. People who produce awards shows have every right to expect to make money doing so. If you produce a thing and make no money from producing it, it is likely that you will not produce it very often.

3. People who go to awards shows like them. They like to dress up and schmooze and smile and enjoy themselves. And there is nothing wrong with that. Nothing. Especially awards shows for Voice Over people who generally toil in hot lonely booths creating art that no damn machine can ever match. (More on that later!)
4. Not all awards shows are equal, and everyone has every right to praise or complain about awards shows and awards and that’s why there is social media – a place where we can find new reasons to be even more divisive and to sew enmity and discord while pretending that we know far more than every other person who posts.

In an effort to rise above all the rancor and to help the community at large learn how to deal with potentially toxic topics like VO Awards, I have decided to start our own Award Show. Ladies and Gentlemen – we present the Joeys! Named after the lovely Jo Anna Perrin – we might even change the name to the Perrin Awards because I think we can con a few grants out of University Funding Organizations who will think Perrin is a famous scientist’s name.

“We must fund the Perrins! Gustav Perrin was a pioneer in butt mole research! We need to be associated with butt moles if we wish to be taken seriously!”

Because art is entirely subjective and saying that one brilliantly read audiobook is somehow better than some other brilliantly read audiobook is patently absurd, The Joeys will have some special rules.
We have noted that the Audies keep merging genre categories so there are fewer and fewer opportunities for anyone to win (except for Scott Brick and Simon Vance). History and Biography – two entirely different things are now one category. Things like that mean fewer winners which means fewer trophy sales and fewer entries which means less money! Here at the Joeys, we want more money. Lots of it.

We will do more of a SOVAS style production – lots of categories means lots of entries which means lots of winners and lots of trophies to sell – and that all adds up to money! Yes! Here at the Joeys, we enjoy money.
Of course, too many categories lead to too many speeches and a really long night. I believe it to be an accepted scientific fact that after 2 ½ hours, people dressed in gowns and tuxes tend to get all itchy and sweaty and their underwear begins to move around, and they start feeling quite unpleasant. (It’s called “Icky Snuggery” in science circles. It was discovered by the mole guy – Gustav Perrin.) The condition becomes quite serious if alcohol is nearby but not available. (This is another Joey Awards difference – our bar stays open until the janitorial staff is ready to go home.)

To combat Icky Snuggery and Award Show Boredom, we will have an emcee/entertainer do wonderful things that are highly entertaining for about 45 minutes or so. While this is going on, ushers will go aisle by aisle and hand out award certificates to every entrant. At the end of emcee’s bit, we will drop a screen – or just pull out a white board. On the screen/board, we will have this message: EVERYONE WINS A JOEY! CONGRATULATIONS! LET’S HEAD TO THE BAR!

So that’s our secret plan – if you pay your entrance fee and submit whatever it is you want to submit (we don’t care because we aren’t going to have any judges anyway) you get to win! In fact, everyone wins. No one loses! If 15 people enter a category, 15 people are going to win. Since we expect to charge $200 per entry, we think you should get to win. The trophy is an extra fee, but you can put “Joey Winner for Outstanding Caspian Sea Islander accent in a Fantasy Book written by a One-Armed Wino” – on your resume, so there’s that.
After a few years, we will have Joey Winner Conventions. And later, we can have Has Anyone Not Yet Won a Joey? Conventions. This thing has legs! It can go on for at least 4 years before someone will kill the golden goose by suggesting we have an A I category.

Note: NO AI Categories. AI is not getting a Joey. Unless someone pays us a real lot of money – like so much that we will happily waive our principles – at least 10 bucks for sure. And even then, we will only award the highly coveted Joey if we can say things like: “And one of the many winners in the category of AI voiced history books is Jim Seybert’s Mac Power Book! Let’s hear it for that!” (SILENCE) “And let’s not forget that AI is absolute shit and anyone who wants to put actors out of work so they can listen to their waffle irons tell them stories can go pound sand.” (HUGE APPLAUSE AND A FREE BOURBON MANHATTAN FOR EVERYONE!)

So. Who wants a Joey?

HAVE A WONDERFUL HOLIDAY SEASON! PLEASE GET VACCINATED. PLEASE GIVE EACH OTHER A BREAK & TRY NOT TO BE DICKWAFFLES TO EACH OTHER. EVERYBODY IS STRESSED. (I doubt I can, but you give it a shot, won’t you?)