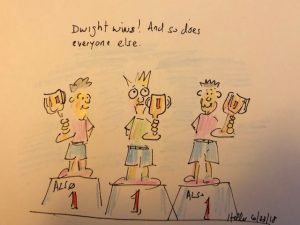 We live in a world where honest criticism is not encouraged. Our children and many of our younger adults have been and are being raised in an environment where all behavior is “good” and praise is heaped upon all equally… regardless of the fact that many people and children behave horribly and merit praise for their actions only in the most extraordinary circumstances – like when they play with matches and only burn down 3 houses instead of the whole block.

“Nicely done Nigel! It must have been very difficult to only torch three houses and not the rest of them! How many matches did you use? One? That’s a good boy!”

There is an absurd movement afoot that started in the late ‘60s, hit its zenith in mid ‘80s and continues today that suggests that the way to ensure a positive and good society is to imbue all with a sense of self-worth – to provide all with a positive self-image. This way everyone will realize that they are of value and what they think and do and feel has real merit and that there is no limit to what they can be and become.

The problem with this is that it is pretty much a pile of bat guano. Not all people are good at everything and some are really bad at some things. I mean really bad. But if everyone tells you how good you are at something that even the village idiot can see that you suck at, you won’t know that you suck at it and you may spend all your time believing that it’s your mission to do that thing.  You will miss out on your real mission – the real thing you should be doing. And you might always believe that you can do the thing you can’t do. For example, let’s say you are a horrible singer. There is no note that you can ever hit or come close to hitting.  Yet our society insists that you be praised for your singing. Not only that, but that you be praised as much as the person next to you – who really can sing.  You won’t know how horrible you are until Simon Cowell tells you on National TV.

There is a fear that singling out one person – adult or child – for a splendid job will make those who were not as splendid feel something less than splendid.  And that’s how we create a society that is unable to focus on real skills as they believe they are skilled at everything.  That’s why so many talented wonderful actors must smile and nod when nimrods tell them that they too are very likely extremely talented actors and can very likely narrate an audiobook just as well as they can.

Well NO. They can’t.

And a gold medal downhill slalom Olympic performance is better – demonstrably better– than a Silver Medal performance and a whole lot better than the guy who thinks he can slalom or luge or skate but has never actually done so.  Sitting on the sofa drinking Pabst Blue Ribbon and eating pork rinds may not be training that is in any way equal to the training of an Olympic athlete.

And when you play baseball and you score more runs than the other team, you win the game and they lose.  And if you can play the piano well and the guy next to you can’t, that’s just fine. He may be a better plumber. We each have skills in different areas and we are completely awful in others. We call this phenomenon – “Life”.   It is what it is.

However when we are good at something, we do enjoy it when someone points it out. And that’s why we like awards. It is my opinion that awards, trophies, certificates of achievement and the like be given to those deserving and not just to everybody who showed up.  I think there is a real difference in Awards for achievement in fields that can be accurately measured than for the arts. I mean that if I run faster than everyone else in the 5K race and finish first, I get the trophy. There is no question. The first-place finisher gets the first-place trophy, the second the second and the third the third.  In the Arts, how does one determine the “best”?

We in the audiobook business are not immune. We have a whole bunch of awards available to us. We have the Audies, the SOVAS, Earphones, Publishers Weekly Listen Up Awards and Voice of Choice Awards and starred reviews and all sorts of swell medals, ribbons and trophies available to us.  As a recipient of some of these awards myself, I must admit that I like getting them. I enjoy being praised because I am a human bean and we like that kind of thing. It is a real honor and it feels quite nice to be nominated for an award and even better to win it.

And if you want an award and don’t have one, you can create your own awards and make sure you win one. I have already won 25 Johnnys! I just haven’t told anyone. (I’m afraid of hurting their feelings when I tell them that it was a tough call but I won it again. This year I came close but Jo Anna Perrin took the prize by cleverly bribing me with her comely looks and  a cookie and by doing a bang up job narrating stuff!)

However, I have zero idea how anyone can really determine who was “better”.  I was up for the Male Voice of the Year Audie Award a few years back. I didn’t win. I don’t recall who did but it was pretty cool to be nominated. But how was I even up for such a thing? Why that year? I sound the same now as I did that year and I sounded that way the year before. I like to think that I am a better actor with every new job (how can you not be?) but I have zero idea how I got that nomination and I know that no one ever called me and said: “I am considering hiring you to narrate a book – ever won a Male Narrator of Year award?”

I don’t know how you can say that Simon Vance reading a biography of Cap’n Crunch – and we know he’d do a bang-up job – did a “better” job than Scott Brick reading a lesbian vampire zombie historical romance or than Hilary Huber narrating the scintillating history of cinnamon pop tarts and their effect on Greco-Roman architecture or even on Greco-Roman wrestling.

I have nothing against getting awards. Everyone loves getting dressed up and partying and sipping cocktails.  But while I understand that someone must win, I am not at all certain that one great performance is better than another great performance.  Judging artistic performance is not like seeing who won the foot race. In the foot race, we all know the winner because he won.  In the art of audiobook narration, we are all – if we have truly created a work solely based on the author’s truth – winners. But there’s only one trophy. ­ And Simon Vance usually gets it. And you need to be fine with that. Simon is comfortable with it – so should you be.

How does it work? There are awards given out by judging teams – qualified by their experience as audiobook bloggists or reviewers or working librarians who sift through the entries and narrow down the choices until only Simon Vance is left. And then there are lesser qualified judges – folks who own a library card or have an audible account who listen to 15 or 20 minutes or less of an audiobook and then they pick a winner using the tried and true method of putting names into balloons, blowing it up and then tossing darts at the balloons and seeing who won.  I’m pretty sure that’s how they pick the Academy Award winners. Some awards are given out if your friends make phone calls on your behalf. Some cost more than others per entry but no awards ceremony can exist without charging entrants.

If you are nominated for an award, I think you should publicize it. If you win an award, I think you should publicize it. But if you get any kind of an award – do not believe that you are “better” than those who didn’t win…or didn’t enter the contest or simply don’t care about awards. I have won many awards and I am friends with many award winners and not a single one of them will tell you that they got more work because of their awards.

I want to be very clear here – if you win an Earphone, an Audie, a SOVA, an ABR or any other thing for a job well done, well done! Good on ya! Go the parties. Suit up and enjoy your self and congratulations! An honor is an honor is an honor.

But as I have said some 50,000 times or so- the way you need to judge success in your career is to get work. And to get repeat business – meaning the publisher or the author who you work with hires you again.  And again. An award may bring you to their attention, but a fine acting job will keep them coming back to you to bring their book to life. And isn’t that what it’s all about?