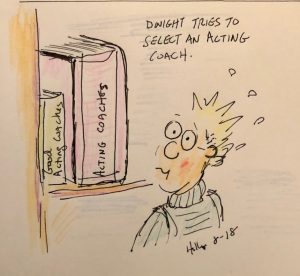 There seem to be a great number of workshops and classes for the novice and experienced narrator to attend in person or via that internet thing that all the kids are using, and I think that’s a good thing.

I have noted, however, that many of the actors that come to work with me in my workshops on the road or at Edge studio or via my website have almost no idea who I am or what I have done or plan to do regarding their education and performance. Yet they have paid me already.

By the time they get around to viewing me in the flesh (it’s always good to get the word “flesh” into a story very early so that readers will hang in hoping something offensive will be coming along soon) their money is already in my account. And they haven’t even researched me. Why would you do that?

You rarely hear someone saying: “I just paid a guy $5000 for a face lift but all he did was staple the tops of my ears to my skull, pull my neck fat into a ball and staple gun that into a man bun in the back of my head, shave my eyebrows and then draw them back in a little higher than they were and then duct tape my cheeks to my forehead. How do I look?”

“Awful! Why would you do that? Was he even a doctor?”

“Did you research him at all? Where was his office?”

“No. I met him on the subway and he did the work in the park. Said he liked the light better which was weird cuz it was nighttime.”

You don’t hear that because it would be idiotic, and no one would do that.

But you will pay money to get “training” from people who have little or no business training actors.

I am not saying all acting coaches are shysters. I am saying some are and if you don’t do your

You can tell you have found one if they spend all their time bragging about that “project” they almost did with Spielberg and how sad they remain since the passing of their dear friend James Dean and they are only 40 years old or so.

Another tell that you’ve selected a shyster coach is when all they do is smile and nod sagely while you spend an hour reading aloud and then all they say is: “Wonderful! Just wonderful! Again please!

ur research and that you might be a moron.

Let’s be clear. It is not the coach’s job to tell you that you suck and will never ever be able to do this.  Sometimes sucky actors get better – or at least less sucky and there is no way any coach or actor can account for the role dumb luck plays in this business.

However, the coach should be able to make you aware of how much work you need to do to ge

t you to where you think you already are.  If you simply want to pay a coach to validate your own lofty opinions of yourself, see if you can get someone on Trump’s team after his impeachment as he has many such folks on his staff who will need work.  We call these people “yes men” or “spineless weasels” or “congressmen”.  If that’s what you want, though, that’s not a coach.  And if you have the money to blow on someone who only tells you how great you are, why are you even trying to get into our business?  You should keep doing whatever paid you that money to waste in the first place.

Acting is for those who simply cannot do other things and be happy. It’s not a choice. It’s a calling and a need.  If you have it, I bet you have some talent. If you think you have it, and you don’t have talent then what you seek is fame — which is not what the actor seeks at all. That may happen for some actors, but it isn’t the goal. Fame is what the Kardashians have. Talent is what Meryl Streep has. The goal is to become excellent enough so that you can earn your living acting and not as a door-to-door door salesman.

I bring this up (and my lunch as well as I am writing this blog while airborne and I think we are hitting every air pocket one can find at 30,000 feet. Someone should really pave this sky – way too many cloud pot-holes. Old ladies and little children have been rolling down the aisle past my seat for the last 15 minutes or so. I’d help them but then I wouldn’t be able to share these pithy thoughts with you. I

imagine they are pretty pithed at me about now for not helping but I am serving the greater good here and it’s highly likely that they will eventually roll back up the aisle to their starting point in short order) because too many actors aren’t researching their coaches and too many “actors” aren’t actors at all and think they are and that creates a disturbance in the force.

Lesson One: Research your coach BEFORE you pay them. If you’re going to do a one-on-on

e session, examine what made you choose this particular coach and be certain that the coach isn’t full of crap.

l a story and an innate understanding of the author’s truth in each and every moment.  If you are there because someone told you have a “nice voice” you need to realize that you may not really have a nice voice ( you may actually sound like a bleating porker but people were just being nice or really mean) and that even if you do have a nice voice, no one cares about it if you can’t act/tell the story.

Lesson Three: Get some basic mentoring and understanding by using the free resources available before you call a professional coach and ask them to tell you all they’ve learned in their many years over a cup of coffee. They may not even like coffee and if you can learn everything from them for

the price of a cup of coffee, what did they know? And if it’s only worth a cup of coffee, is their input all that helpful? There are, at last count, some 58 bazillion FaceBook groups dedicated to various voice over acting genres and there’s a ton of free information out there just waiting for you while you have a cup of coffee by yourself.

ideo without an iota of useful information); look at the very informative video primers on the ACX site; google stuff.

Lesson Four: Listen to some audiobooks! I keep getting “actors” who want to do audiobook narration who have never even heard one. WTF? You must know what they are before you decide you wan

And, as a side note, you know how in every single class you took in school there was a student who “knew everything” and needed to comment on everything and lord their dubious achievements ove

r their classmates? That happens in workshops too. And remember how you felt about that person in class? How you hated them and silently wished they would spontaneously combust, so they’d shut up and you and your classmates could make smores over them? That’s how everyone feels about the person who does that in workshops too. Don’t be that guy. As a rule of thumb, there is always at least one total dipstick in every workshop. If you aren’t sure who it is, it’s likely you. So, keep it quiet and just try to learn and get out of there before everyone discovers what a jamoke you are.

Having said all the above, I am not trying to dissuade you from the business or from seeking a coach. I would love you have you join us in the biz! I would love to coach you! But do some homework.

One final thought (I betcha it won’t be my final thought but it’s hard to say the way this airplane is bucking. …feels like a mechanical bull in a western themed bar…) Many coaches work independently and/or with actor VO training groups and they will likely talk to you about making demos at some time. T

his is not a scam or a come-on. VO actors who don’t have a demo, need a demo and each different VO genre requires a different kind of demo. The rules for a commercial demo are different than for an E-Learning demo and for an Audiobook demo and so on…   A training path toward learning enough and getting “good” enough that you should have a demo is a good thing – not something to be suspicious about. Although I do wonder about doing a weekend workshop and getting a demo made at th

e end of it as part of the cost. I am not at all certain that someone who shouldn’t be making a demo on Friday night because they aren’t ready to compete in the market place is magically ready by Sunday afternoon.

Hmmm. I think that actually was my last thought. How ‘bout that!

Nope! I lied. One more thing.

I want to remind you that if you are free the October 19th weekend, you might want to join Paul Alan Ruben, Sean Allen Pratt, Paula Parker, Julianna Wilson from PRH, Steven Jay Cohen from Spoken Realm, Carol Monda, Jo Anna Perrin and me at the New England Narrator Retreat. It’s a wonderful weekend of learning, sharing and camaraderie in a beautiful setting. If you’re reading this on my website, just click on the “Workshops” tab and you can read all about it and register. If you aren’t, go to www.johnnyheller.com and follow the link or just go to it here:
https://johnnyheller.com/product/the-new-england-narrator-weekend-retreat/