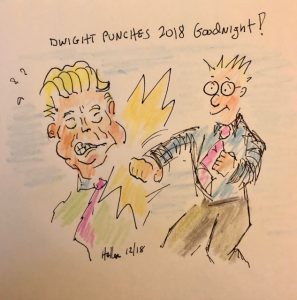 OBSERVATIONS ON A YEAR GONE BY

When we look back on 2018, and we will because invariably someone will say – “Remember that time you were running to an APAC Mixer and you fell and broke your ankle and your purse opened and all of your cocaine spilled out onto the street and when the EMTs came to help you, they discovered an illegal gun and the cops arrested you for possession and further investigation revealed that you were a Chechen hit man and you got sentenced to hard time in prison? Remember that?”
And you’ll say, “No. No I don’t.”
And someone will say – “Sure you do! It was in ….2018!’
And you’ll say, “Oh yeah! I do remember that. Hell of a year.”

Here are some highlights:

And that’s all for that sort of thing. I don’t want this to become one of those Christmas card letters you get from people you don’t know well who share all the family’s successes and throw in few pet and great Aunt deaths while they’re at it: “Wonderful year my friends! Except for Aunt Mildred who got decapitated by an old fan belt on her Dodge Dart. Lester told her not to lean in too close, but she didn’t listen (always hard headed -Mildred) and that belt snapped off and sliced through her neck like a Ginsu through an over-ripe tomato. And, speaking of hard heads, hers went flying right out the garage door and hit Mr. Fogelson, Lester and Mildred’s neighbor, right in the crotch and he doubled over like…. well, like a fella who got hit in the balls by a flying hard head! Billy had his I-Phone out and he videotaped the whole thing and we sent it off to America’s Funniest Home Videos and they said we might’ve won some real money but that all the blood and such made it a little hard for kids to watch.
We don’t really agree – I mean kids today watch all kinds of bloody things what with Walking Dead, and Nightmare on Halloween Street 12 and SAW 18 and Harry Pot and the Half Bloody Whatsit and what-not on the TV and movie theaters. When you think on it, and we have, you put a little music behind it to time with Mildred’s head zipping along and you’ve basically got a Disney Musical number. That’s what we think.
Anyhoo, the kids are doing much better now that Charlie got put down. He used to growl something ferocious and chase them around the house and he bit Selma’s thumb clear off. (We put the thumb in some ice but then Billy poured Mr. Pibb over it, not knowing the thumb was in there and even though it got attached pretty good after all, Selma is sure sucking her thumb a lot now and she’s nearly 18 so it looks odd. But that Mr. Pibb sure tastes good I guess.)  The point is, the kids seem much happier without Charlie and the dog is in a better mood too. Charlie was certainly more trouble than he was worth and I’m not even sure he was officially related to us – except he had the family forehead wart so maybe – but I guess it’s fair to say he won’t be missed and as soon as the basement room is aired out – which should be sometime in 2030, I’m thinking about turning it into a place to house my road-kill animal collection. Milly says I need to get em stuffed first but they don’t seem to be moving much right now so I’m not sure I see the point.
I guess that’s all the news for now, so we wish you a very Merry Christmas. (I know some folks don’t like saying that these days, but we celebrate it and don’t mind saying so and to be honest, if it weren’t for Christ, we wouldn’t have any reason for Christmas bonuses and ugly sweaters and that’s just the way I feel.)”

Aren’t you glad I don’t send those things?

And now a few things of actual import to the Audiobook/VO community:

If you want a better rate, be prepared to turn down jobs that don’t meet your minimum.  And never, ever sell yourself cheaply. Let the bottom feeders on Fiver and other crap sites get the lousy jobs and bring down the value of the industry. If you will go a job for $5.00, guess how much you are worth?
(here’s a hint: $5.00. You are worth $5.00.)

I guess that’s enough to wind up For the Hell of It for 2018. I’m sorry I didn’t post more of these – but I was busy…winning awards and bragging on Facebook!

In all seriousness, thanks to each of you who read this, who support me and cheer me and challenge me to be better.  This business has brought me the best friends I could ask for and I will always do my best to embrace our community. Happy Holidays. May your New Year be blessed beyond your dreams.