FOR THE HELL OF IT
by Johnny Heller
Coronavirus Issue 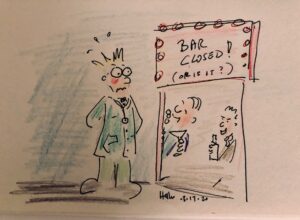 First, let me just say that I am not a real doctor. I have no medical license and many of my facts are completely made up on the spot. However, I watched a TV show the other night with a bunch of doctors doing doctor stuff, so I think I am ready for your questions.

Q: Confused in Clearwater, FL:
“We are here for Spring Break! The school sent us home but we already had the plans made and Mark had his brother’s car already and Wizzer and Dash got all the chips n beer n I had like a huge bag of weed so we said “fuck you virus! You only kill old dudes! We are off to the beach bitches!”
It took us like 20 hours straight to drive here and our hotel isn’t anything like the pictures on-line, but we aren’t here for the room service – know what I mean?? The beaches are full of babes and I think even Mark might get some action – which would be awesome cuz he’s really developing some serious depression vibes and getting laid would be sooo cool for him.
But my question is this – can the virus live in water? And if I’m in the water and playing frisbee and a shark bites my leg, is it easier for the virus to get in through the shark bite? Do sharks get it? And don’t worry about us making old dudes sick, man. There’s no one else here! We see the old guys looking at us through their windows and stuff but none of em seem to be where we hang out. I think they eat dinner at like 3 o’clock and then go to bed or something. So. Looks like we are kicking this Corona Virus in the nut sack! Am I right!!???

Q: Self Isolating in Jersey City, NJ:
Dear Dr. Johnny,
I’m totally into self-isolation. I’ve self-isolated my whole life mostly because I really dig comic books – like Richie Rich and Sad Sack and Woody Woodpecker. And of course, Archie. Don’t you just love Veronica? She is so hot!  It’s all I’ve talked to anyone about for 30 years, so I am pretty much great at being on my own. I just wanted to share the good parts of not being social. 1.– you don’t have to wear pants. That is so handy for so many reasons.
2.  – um. There is no 2. It’s pretty much the pants thing and that’s it.
My question though is this – I get that I am not supposed to touch my face because my hands might be dirty. Actually, my hands are really dirty. You can’t even tell my skin color for all the crap on my hands. But if I promise not to touch my face or any other faces, can I still…you know…touch other parts of me?
And remember the pants thing I mentioned. I’m just sayin… I mean, it’s right there! And I am alone anyway… And Veronica Lodge!
Lemme get back to you.

A: Dear Self-Isolating in Jersey City.
I’ve never been to Jersey City and now I will never go there. Do what you want. Just… Ick. Next question!

I understand that I shouldn’t go to bars. But can I have a drink at home?
A: Yes.
Q: Can I have friends over to have drinks with me?
A: No
Q: What if my parents aren’t home and I had just a few close friends over for a beer or two.
A: No.
Q: What if they came anyway and brought other friends?
A: No.
Q: What if there were a lot of friends – well, shit. I don’t even know half these people… Hey! Get off the piano!! Jeez! Oh no! Someone just zuked on the couch. How do you get puke out? If someone pukes on your couch and they have the virus can you get the virus when you clean the puke?
A: Yes.
Q: Well I can’t just leave it there! It’s all pukey and zukey. So are 50 people too many to be in one place drinking and puking?
A: Yes.
Q: So, 100 is really too many then?
A: Yes.
Q: Okay. Understood. No one looks sick though. I mean, drunk sick – wasted I guess but not contagious virus sick. Do people with this thing look like the Walking Dead or anything? Is there a way to know if they have it?
A: No.
Q: Let’s say, just for example, there’s a big group of people gathered together to drink and there’s a pandemic going around, does that mean that it’s pretty likely that a certain number of the alleged drinking group will have the virus and it will spread and maybe make a lot of people who aren’t even here sick later?
A: Yes.
Q: Final question. Will you buy us more beer?
A: No.
Q: He said no dudes! Party is over! You all have to go! And don’t talk to anyone or you might kill em with your virus breath!
Right?
A: You’re an idiot. Your friends are idiots.

Q: Not so old in St. Louis, MO
Dear Dr. Johnny,
Why are so many people so worried about me and my friends? Yes! We are over 60. Hell! Ethel is like 87 or something and she smokes 4 packs a day! Chet may be older than dirt for all I know but that man can dance!! Of course, he on occasion drops his oxygen tank on your feet but that’s ok.
Anyway, we don’t want to stay at home. We want to play bingo! We want to eat lunch and go golfing! The President of the United States of America spends more time golfing than any of us and he’s over 60 too! What’s the problem? We’ve had the flu before. I think this whole thing is an over-reaction. What’s the worse that can happen? C’mon.
A: Dear Not so Old,

You are in a major risk group. You could have difficulty breathing. You could die. Die badly. There is no cure for this yet and it isn’t like getting a cold. Some folks have no problems or symptoms. Others do. It’s not fun.  It’s awful.

Please don’t use anything the President does as an example of what you should do. He is not someone you should be modeling. He is a legitimate threat to world peace. Is that what you want to be? A threat to the entire world just by being in it? No. He is also a pathological liar. Not to be trusted.
This virus puts people in your age group at risk. Especially if you already have health problems. Like Chet. Want to see what the virus does to him and his oxygen tank?
Take a look at current pictures of the streets in Sicily or in Madrid. You’re older now. Be wiser too.
And even if you don’t want to do the right thing, think about the fact that you and your friends can pass this on to many others until we all have it and we all need medical attention and there won’t be any. Because we don’t have enough doctors or nurses or hospitals or beds or police or firemen and many of them will be sick too.
You want to golf and play bingo?  No offense Not so Old but fuck you. And fuck Chet and fuck Ethel.

It’s St. Patrick’s Day and look at what I’m doing. I am writing a tale of caution to you.  This is an interesting and frightening time. Wanna live through it?
Get this straight. This is not about you. It’s about everyone you ever knew and everyone they know. This is for keeps. It is serious and we can get through it IF we follow the guidelines and use common sense.
We have food and necessities in abundance. Don’t stock up for the apocalypse. Buy some food and leave some food for others to buy and the stores will get stocked. If the authorities need to close some things down, you will still be able to buy groceries and medicines and walk your pets. Life will change for a while, but it has to because this thing is too big to deal with if we don’t make some fundamental changes in who we are and how we behave.
Be there for those in need as much as you can but don’t tempt fate and go to the beach or have parties with friends and ignore sage advice.
It is not just “old people” who will get this. It is not just “old people” who are at risk. They are at greater risk, but you can get this regardless of your age. And if you already compromised, your risk is increased. And even if you aren’t old or ill, you can pass this on without knowing you even have it.

The problem is that we are reacting to this too late. Is there someone to blame? Of course there is – his name is Trump. But even that isn’t the point right now. We can deal with him and his minions after we get through this. And we will get through this if we all don’t act like a bunch of self-serving nimrods. Even now, researchers are working on the problem and there is some good news.
No question having a homophobic science-denier like Mike Pence involved gives no one any faith. Having Jared read up on viruses is obscenely stupid. Listening to Trump politicize this for his own ends is heinous. But they are the outliers.

We are the United States of America and we have scientists and buckets of money and the scientists aren’t like our current leaders and they will work with other brilliant minds (even foreign ones!) to battle this and we will come out stronger and wiser.
Just don’t expect it to be better tomorrow. It will take some time and you will have to sacrifice but that is what freedom and citizenship is all about. And we are all citizens of the world. Let’s act like it. Now.