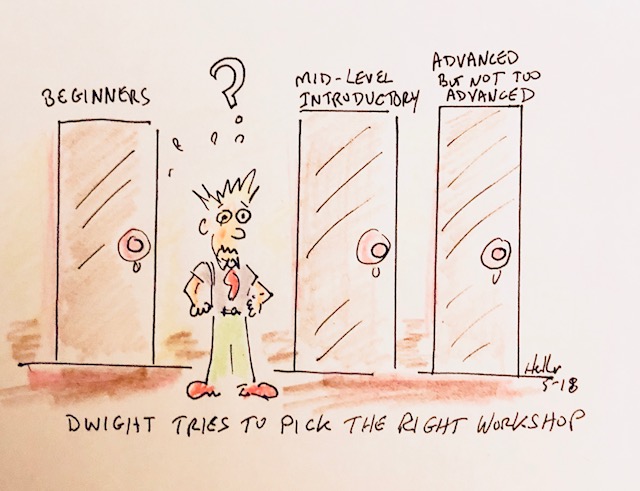 Since I’ve broken my promise to write blogs more frequently, there’s no better time to write one than right now – when I’m completely swamped with work and trying to put finishing touches on my Splendiferous Workshop.  It’s always wise to do far too much and be tired and grumpy than to plan and schedule each task and do it in an orderly fashion I say!

raised in the Johnny Heller Workshop Alumni Page – namely what do you want to see on a “Master Level” Workshop Agenda?

There were tons of great ideas, but I think that I should start with this: there is a difference between an introductory workshop and a masters workshop. This is not to say that the experienced narrator will not learn useful things in a less intensive workshop geared toward the basics and the needs of the newer narrator – he will. He must. I think one would need to be brain dead on a Jeff Sessions or Ben Carlson level to not learn something useful in almost any kind of workshop.

If the workshop is to be for more experienced narrators, the agenda and the experience must be more detailed and more intense and geared exclusively to the narrators who already know the basics and need specialized training.

However, if you seek training in realistically playing various ethnicities – perhaps a workshop about just that is called for. If it’s time management or vocal health you want to investigate more deeply, you might want to concentrate on one-on -ones with coaches who specialize in those areas.

There are problems one encounters in planning workshops.  Here are some that come immediately to mind:

It is simply impossible to cover every single issue of import in a one-day workshop.  I try to cover 3-4 areas of interest for the most part a

nd if I sense that a subject requires more time and attention, I ask the attendees if they would rather stick with it (and maybe not hit one of the topics on the agenda or give it less time in the day) or would they rather move on and consider attending a one-topic workshop in the near future.  I dislike like not covering everything promised on an agenda, but I think it important that I allow the attendees to control the information/learning flow based on their obvious interest or lack thereof.

If it seems that a topic really needs its own workshop, I try to accommodate that interest with a single topic workshop. Which leads to problem number two:

I have done full day workshops solely on character choices. I have done full days on script preparation, Non-Fiction and on Fiction. To make workshops like these work, I seek questions in advance and encourage active discussion in the workshop.  What frequently happens is that the actors who made the workshop a priority by pressing for more in the previous multi-topic workshop, are less interested in it than they w

ere. Perhaps they were all talked out from the first go-round or perhaps their passion dissipated for the subject during the time it took to set up the next event.  So, we may end up with a one topic workshop and only marginal interest in it.  I deal with this by limiting one-topic workshops to 3-hour sessions with a limited number of actors in attendance.

A “Beginner Workshop” needs to be just that. The expectation should be that the attendees need to know all about the industry and that they may not even be actors at all.
I rarely call any workshop a “Beginner” Workshop because there are no workshops anywhere that they can go to next.  If a “beginner” – a “newbie” takes a one-day or 4-week or 3-hour workshop, are they suddenly no longer new after it’s over?  Are they experienced and ready for a “Master Class”? In a word – NO.

I think the beginner should find and attend an evening Q & A with a quality coach or two. It should allow for the coaches to present an overview of the industry and of what they (the coaches) think is important for the newbie to know and I think the beginner should follow up with one-on-one training or with a workshop geared for newer narrators (but not necessarily brand new).

I work with Sean Pratt for Rachael Naylor’s Voice Over Network in London. She does exactly what I like to do. A pleasant social gathering

with an overview of the classes and a lively Q & A and then we begin the actual workshops the next day.  Steven Jay Cohen and I did much the same last year in Toronto.

We must understand that the word “Beginner” comes with all sorts of preconceptions that keep people who have done 10 titles away when they should really be there.

The word “Master” is equally confusing because who knows when someone is a master?  Scott Brick, Sean Pratt, PJ Ochlan, Tavia Gilbert, Hilary Huber — can all be safely called “masters” so if I hold a Master Class, shouldn’t they attend?  They aren’t gonna come! They will tell me to take my “master class” and shove it up my keester. (although I bet they wouldn’t use that word.)

I prefer these names: LEVEL ONE, LEVEL TWO and INTENSIVE (workshops geared toward a deeper understanding of a particular topic or two.)

A Level One Workshop is for actors of all levels to gain insight into the craft of audiobook narration.  It covers a vast array of information and subjects – depending on the length of the workshop -one day, two days or an evening.

Level Two – is for the more experienced narrator and the agenda is limited to a few specific subjects of interest to the attendees.

Intensive is as previously discussed – a “deep dive” into a specific subject or two. It is for the experienced narrator who wants to learn more about a specific subject and doesn’t want to hear about how to punch record for the 15th time.

And now we head for the biggest problem – at least according to the Facebook respondents to my original question – who gets to go to these workshops?

How should the coach decide who can attend a Level Two or “Master” Workshop? Let me go over the many ideas offered to me and tell why I like none of them.

In my experience, no one ever knows who listens to their auditions – they just know they made it or they didn’t.  Not only do I lack the time or inclination to listen to 50 plus auditions, I am simply not geared to say “no” that many times.
And how would people feel about working with me (that Jerkwad Heller!) after I turn them down?
Some actors are great at monologues and auditions but suck at performance.

Yet another idea from the fertile Seybert mind and I like it very much. I work closely with some wonderful coaches and I trust them completely not to send me dunderheads and dipsticks. However why would they send students to me instead of just teaching them themselves?  Yet this is still a good idea and it might lead to a better workshop experience if I include additional coaches in the agenda and we all work together – then, of course, we are talking about a weekend and not a single day and everything gets bigger. See? This is hard!

Here’s what I think will work:

So. It’s clear that this is a tricky issue.  I think that if actors find their way into workshops that they aren’t ready for, they need to learn the lesson to take one step at a time and not put themselves into a learning situation they aren’t ready for. I also think the instructor should/will note it and deal with it in whatever way seems best at the time. If a student is asking questions in an advanced workshop that aren’t right for the level, I’ll table it and talk to them later.  I don’t want and won’t allow a class to be held back by an actor out of his depth, but I won’t “shame” the actor for not knowing what he doesn’t know.

The onus is on the coach to do his best to get the right group into the workshop and on the actor to choose wisely and not take workshops beyond their ken. Either way, I don’t think it’s a major problem because everyone is going to learn something useful whether they are in the “right” workshop or not.