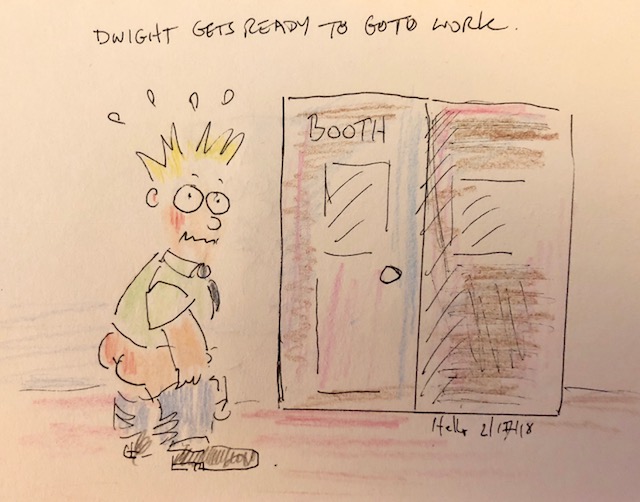 When it comes to manners and polite social behavior, we have lost our way for the most part. Since we live in a world where are friends are numbered by quantity on social media sites and we wouldn’t recognize the vast majority of them if we ever saw them in person – and likely wouldn’t be friends with them if we ever got to know them – we have no idea how to behave when we actually meet people.  Very few of our social media friends ever get more than short tweets, amusing cat GIFs and invites to applaud our latest swell thing.

It’s no wonder that the modern audiobook narrator is clueless when it comes to social interactions outside the realm of Facebook.

Fortunately, I am here to help you.

Let’s first look at how to handle ourselves when we are alone. If we can’t master that, we have no chance of succeeding with other air breathing life forms

Home sound studios are hot labs where multi=legged insects and dust mites like to hang out and shoot the bull.  It tends to develop a scent like a high school soccer player’s locker – a JV player at that!

That’s why we mostly work naked when we are at home. Joel Leslie Froomkin wouldn’t consider recording even an intro to a book without taking his shirt off first (and he posts every shirtless moment on Facebook too – mostly to show off his 6-pack.  I tend to keep my 6-pack in the fridge where it belongs but Froomkin lives in Florida and a lot of weird things happen down there).

By all means – when you are working from home – work naked. Unless you have a leather chair. That would be gross.  And you’re going to want to be careful about spilling coffee or tea. No one is going to believe that that big red splotch on your junk is from an unfortunate tea incident in the booth.

At home you are free to make as many noises as possible. However, if you make noises while you are recording, you will have to re-record or edit later.

My dear friend Simon Vance has a system he has perfected over the years where he makes a rude noise and marks the spot in his recording with a bookmark and a comment. For example – he might have something like: “It was the best of times, it was — BRRRRRAAAAAAAAAPPPPP PHFFFFFFTTTTT!!!” and he will mark it in pro tools, giggle and calmly intone “Giant monster fart -likely from some brisket.”

At another juncture his reading may be interrupted yet again with a “ppppttttttewwww” – and he will state – “wee little fart – perhaps brussels sprouts” and so on. In this way he is not only giving his body a reasonable chance to comment on his work (and his craft) but he is having some fun in seeking the source of the sound.

Sometimes your stomach may have something to say while you record. This happened to me today. I was happily narrating along, and my stomach would not stop making gurgling noises – like a ghost walking on creaky stairs or an old door on rusty hinges. It was becoming a problem. I’m certain it happens to all of us. Here’s what you want to do:

Yell at your tummy.

Let it know who the boss is in this relationship.
I said to it: “Hey! You! Stomach! Shut the Hell up right now!  I am not kidding around! I will pull this booth over!!”

And I said: “Don’t sass me stomach! So help me if you don’t shut the f*ck up right now I will kick you in your stomach nutsack! Is that what you want? A kick in your tummy yarbles? I will rabbit punch your stomach throat you Sonuvabitch! So shut up now!”

So that’s the way to handle that.

And then get something to eat.

In the privacy of your own home booth the only acceptable way to handle messing up on speaking words written in your native tongue out loud is to curse yourself, your family, your author, your equipment and anything else that comes to mind.

Say the line as written is: “Edith had always enjoyed her throat wattle and the way it lent vibrato to her singing – in fact Edith thought those without wattles were worthless warblers – imagine trying to warble without a wattle!”

And you say: “Edith had always enjoyed her throat warts – “

What you want to do is recognize you made a mistake, attempt to correct it and vow to do better.  Thusly:

“Edith had always enjoyed her throat warts –  What? What??? Throat warts?! What in the name of Jeffrey Kafer is a throat wart?  Dammit! Patrick Lawlor wouldn’t make this mistake! Robert Fass wouldn’t! Dammit! I bet Steven Jay Cohen would though. And Bill Lord. He would screw the pooch on this one.   Awright. C’mon. Let’s get it right. Here we go…

‘Edith had a throat wad…’. WHAT????!!! Jumping Rodney J Turner! I swear by the hair on Kitty Hendrix’s head I am gonna get this right — one more time –

Oh! C’mon!  Dammit Peter Berkrot!  I freakin hate this! I Joe Hempled the hell out of this damn thing! Screw you Edith! You wattle-throated-demon from hell!

And I hate it on Saturday Night Live when they go to commercial break and then come back just to show grips setting up the next bit! What is that about? I don’t need to see that! 3rd wall anyone? Dammit. I’m gonna do it. I swear. No more mistakes. I am gonna Emily Woo Zeller this thing right now!”

And then you get it right and move on until you make your next mistake -likely on the very next sentence but at least you’re prepared for it this time.

Now you are scheduled to go to a professional studio. Caitlin Garing of Harper Audio has you booked at JMM to do a book. You are on from 10-5 for 4 days and they’ve hired an engineer and a director. It’s a big book and a big deal.

Wear comfortable clothes that say – “I’m here to work – not make a fashion statement.”  However, you don’t want to look like a denizen of the dipsomaniacal persuasion.  So business casual is the way to go.
Once you get used to your engineer and/or director and the studio, you might feel fine loosening your tie or rolling up your sleeves but don’t get so comfortable that you forget where you are and start taking off your pants.

In fact, to help you keep things professional, I am going to advise you against clothing held in place with Velcro or magic.

Keep your pants on.

Scott Brick is the only narrator who has a Pants Optional contract and that’s only because he insists on it. Apparently, Dan Musselman once remarked offhandedly – “pants – schmants – just tell the story” – and Scott took that to mean that pants get in the way of the narration.  Producers have learned to add the Brick Addendum that allows them to insist that while he can work pantless, he must at least wear fashionable culottes.

While your brain is fully aware that you are not at home, your body remains clueless and will gurgle, toot and snort without a single thought about who will be bearing the brunt of the gurgling, tooting and snorting.

To avoid feeling embarrassed, you are going to have to come up with some witticisms to make light of the whole matter and keep the producer, director and engineer at ease.

Try some of these:
“Whoa! You guys only heard that! I’m living with it!”

“Hey wanna come in and adjust the mic now? …Har Har! No you don’t!”

“I don’t remember eating that.”

“Hey! I didn’t know this was a dual narration!”

Again, only Scott Brick has a fart clause in his contracts. It allows him to announce the beginning or end of chapters with various poot sounds and to trumpet lunch.

Mistakes should be handled almost the same as you would at home – by invoking the names of narrators you know and mixing their names up with/or using them to replace swear words.

“I totally Dion Grahamed that sentence? Can I try it again?”

“Oh Rosenblat! I Therese Plummered the thing! Son of a Zanzarella!”

“For Sean Allen Pratt’s sake – I suck at this!”

Do be careful not to use the name of a narrator who will not make as many mistakes as you do though. It may give them ideas you don’t want them to have.

Always remember the words of PenguinRandomHouse’s Julie Wilson who recently gave me this advice regarding audiobook narration: “Whenever possible, don’t suck. If you suck at narrating – well, it just isn’t good.  We here at PRH have a long and proud history of nonsucky audiobooks and we’d like to keep that going.”

AND NOW – ANOTHER COLUMN FROM MR. ANSWERMAN – Where we answer questions from our readers.

Mixed Up Mary writes: “My boyfriend and I are not getting along. He insists I bring my girlfriends on our dates and he frequently spends more time with them than with me.  I think I saw him kissing Michelle the other night but when I asked him he said he was just helping her get a piece of spinach out of her bicuspids, but we were at a Chipotle and I don’t even think they have spinach. I went home and cried all night. What should I do?”

GOHEAD AXME – The sound of a single tear is not heard. The sound of a thousand tears rolling down the soft skin of a sad person is still not heard but if you pour a hundred thousand tears into a bucket and pour it out in front of an Audio Technica AT2020, it will be heard.
But it will still not be as loud as when you’re at Niagara Falls. That’s really loud and a bucketful of tears is pretty insignificant in comparison.

You should take him there and push him into the falls. Listen to see if you can hear his tears over the rushing water.
You probably won’t be able to.

Curious Marvin asks: “Why is there so much suffering in the world? There is poverty and hunger and violence. Are we just an evil species – a life form with no respect or empathy destined to destroy each other and our planet? Will we ever learn?

GOHEAD AXME – It is the nature of man to do and to be. Is it not the case when you go to Ikea and buy an entertainment center that you must assemble yourself at home that you peruse the instructions with a sense of wonder? And is it not the case that when you have spent 4 hours on the assembly that the box says will only take 30 minutes you find that you have accidently put three shelves in backwards so the rough non-sanded edges face forward and do you not always find that you have left over parts that you cannot understand the need for? And do you not discover when you screw in the final top shelf that it has a great huge gouge in the center of it requiring you to take it all apart and repackage the entire thing even though there is no way in the world to get all the pieces back into the original box and the maker won’t accept the return of the package if it is not the same as when you originally purchased it and now you are tired and sweaty and your fingers are bleeding and your back is sending pain messages to your nerve center and you haven’t had dinner and now you have wasted your entire evening that you have some anger in your soul?
I know I would. I think one of the great issues that tear at the soul of man is difficult to assemble home furniture.

Someone should look into that.