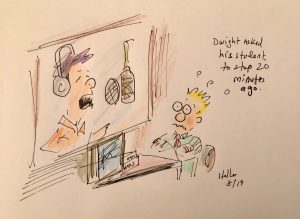 Many of you have forgotten that I write a blog. This is likely because I keep forgetting to write it.  There is a lesson in this for all of us about assuming responsibility, smart scheduling, meeting deadlines and goofing off vs. working; but it’s mostly a lesson for you since I already stopped paying attention to myself.

I have read a great deal lately about some wonderful coaches. I have also heard a great deal about horrible coaches and bad experiences. So, let’s examine this looming crisis the VO Educational field.

Everyone who wants to learn something they know very little about would be a good start. Also those who wish to know more or want help in specific areas of audiobook narration.

Research this carefully. If an audiobook coach doesn’t have an impressive list of audiobooks to their credit, why do you want to learn how to be a successful audiobook narrator from them?
Far too many – talented and untalented – actors are putting out their coach shingle and accepting money from dunderheads who haven’t researched them enough to know that they lack the experience to coach.
There’s nothing wrong with being a coach and certainly nothing wrong with being a brand-new coach – AS LONG AS YOU AREN’T ALSO A BRAND-NEW NARRATOR. Every coach has a first time. That’s fine. But know the craft before you pretend to be able to teach it.
Before I began coaching, I had many years of experience as a successful narrator. I only began coaching because other actors asked me to help them and I was tired of being asked to share what I spent years learning over a cup of coffee. Which brings me to —

Professional coaches charge money. They are sharing information and guidance and using their experiences and knowledge to help you grow.
Offering a professional actor/coach a cup of coffee is not acceptable. Here’s an example of what happens all the time:

Dipstick: Hi! Johnny? Are you Johnny? I’ve heard a lot about you, and I want to learn about this audiobook stuff-

Dipstick: My cousin knows you – well – she knows a guy you once met in a Trader Joes in Chicago or some other city – it could be Lansing…anyway…you told my cousin’s friend – this guy I think – that you were an audiobook narrator? Do you remember? He asked you to save his place in line because he forgot to get those peanut butter filled pretzels? I love those! And those chocolate covered coconut almond things? OH! So good! Anyway. You held his place in line and he saw that you were listening to an audiobook and you guys started talking and it turns out that you were an audiobook guy and a coach too! So he asked for your card and you gave it to him and then you both left – this was like 2 years ago –  and then my cousin was talking to  this guy – his name was Tom or Bill or something – do you remember him? He was kind of tall with a mustache or a beard? Or maybe he was bald? I’m not sure about his hair now. I think he wore a belt though. Anyway – somehow they got talking about audiobooks and your name came up and he told my cousin about Trader Joes and he gave her your card and she called me because I’m like super interested and everyone always tells me – ‘with that voice, you should be doing something!’ so I was wondering if you could come to the Starbucks near me and I’ll buy you a Venti Latte and you can tell me about the business?

JH: I don’t do that. You should research the business online and then, if you’re interested enough to pursue it, take a workshop or schedule a coaching session.

Dipstick: What? I just want to buy you a coffee and get some questions answered! I don’t want to buy a session!

Dipstick: You can go right to hell! What a jerk! I’m so telling my cousin about you! (hangs up)

Note: I enjoy coffee. And if you wanted to discuss coffee over a cup of coffee, that would be swell. But don’t ask a coach to coach you for free.  It’s not just a chat you seek – you want what the coach is in a unique position to provide and you don’t want to pay for it. Why? Why would you do that? It puts the coach in a very uncomfortable position.
“I understand you install cesspools! – lemme buy you a coffee and then maybe you can stop over and help me with my pool of cess!”

It doesn’t work that way.
I’ve had acquaintances ring me up and ask me to tell them all about the business – with no respect for my time or skill set. I try to be nice and polite. I tell them a bit about the business and then suggest they do some research on it and on me and then consider booking a session.
Some go on to work with me. A few have cursed my capitalist ways and hung up on me. Guess which ones go on to have careers in the industry?

If you want to get coached by a professional, you need to understand that you have to pay. Coaches have earned their knowledge and, if they are any good at imparting it to actors, they deserve to be paid for it. Most coaches charge $150-$250 an hour for one-on-one sessions. Some more. Some less. Sometimes they offer a discount if you buy X number of sessions. Group workshops may cost more depending on what is being offered and the venue costs.

Some coaches concentrate on genres, characters, performance -some do it all. Either way, look them up. Check to see if they have any reviews. Ask your fellow narrators for their advice. If it isn’t the right match, don’t stick with that coach.

Nothing is more annoying to a coach or to a regular normal human being than when a person asks them a question and then doesn’t listen to the answer.

STUDENT: “I totally understand. You got it. (and then off they go to their performance)

COACH: “Well. There were a few moments there – “

STUDENT: “Gotcha! No problem. I will fix it”

STUDENT: “I know! I totally knew that! OMG. Lemme try it again! I can do it better—”
LISTEN!  You are paying for coaching – not for ego stroking. If you want your coach to just watch what you do and applaud your every choice, hire your mom.

Scientists at the famed Institute for Looking Shit Up and Experimenting on Things in Helsinki, Finland have concluded, after years of study, that actors who don’t listen to their coaches will not improve their performance one iota – not a jot. Not a pinch.  Dr. Johannes Biggenbum, Head of Research at the Institute, summed it up this way: “The data has shown us beyond the shadow of a doubting type of thing that the actor who does not listen to the coaching person who he is paying to say things and the actor who refuses to do the work…um necessary to have a chance of success is – how do you say in your country? – a bag of doucheness. Yes. I think so.”

Don’t be a piece of unfortunate data. Follow at least some of the advice I’ve shared here. Please. It will help you and it will help whoever coaches you to help you.

In an unrelated bit of interesting news, Denmark is the world’s leading exporter of sperm. I don’t know more than that. I learned that from the wonderful British show QI. Also interesting is that I wouldn’t be able to point out Denmark on a world map, but I am certain that I don’t want to work in their customs office.

I hope this day and every day brings you a chance to be great and that you run with it.