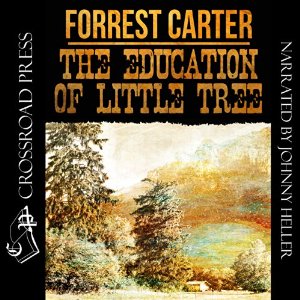 We try, most of us, not to make snap judgments. We like to believe that we are open-minded and willing to give our attention to an idea or notion that – on its face – seems suspicious. We may not be open to stupid ideas like selling automatic weapons to psychos without a background check, but most ideas we are willing to hear out.
Unless we hear that the idea, story, book, movie, notion comes from the brain of someone society has branded as politically incorrect or plain evil.

I recently auditioned to narrate a wonderful book called The Education of Little Tree by Forrest Carter. David Wilson of Crossroads Press gave me the gig and the book is now available on Audible. It’s a moving story of a young bi-racial Indian boy growing up in a log cabin in the early 1900’s and discovering the beauty of nature and the ugliness of racism and bigotry. An amazing book.

Forrest Carter had the book published in 1976 and claimed it was semi-autobiographical. The book was a huge success. The thing of it is, that Forrest Carter, the tree hugging half Cherokee novelist who wrote Gone to Texas (better known as the Outlaw Josie Wales) and who charmed Barbara Walters in an interview on the Today Show is actually Asa Earl Carter , the bigoted racist segregationist anti-Semite KKK jerkwad who was instrumental in the Gov. George Wallace political camp. NOT Forrest Carter. Apparently that’s a name he created so he’d no longer be Asa Carter (clever switch eh? That’s like me switching from Johnny Heller to John Heller — ooooh! no one will ever realize it’s still me! ) He also lost 20-30 lbs and grew a mustache.

People reinvent themselves all the time in America. John Cougar Mellencamp was once John Mellencamp. And then John Cougar Mellencamp again and then I lost interest. Mark Wahlberg was once Marky Mark. Happens all the time. The thing is that Forrest Carter wasn’t a good person when he was Asa Earl Carter. Asa Earl Carter actually left the George Wallace machine because he thought Wallace was too soft on segregation. George Wallace! Soft on segregation!

It’s no wonder Carter reinvented himself to become a folksy novelist of the early American West. We don’t like our novelists to be horrible hate spewing bigots. It makes it hard to enjoy their books.
However given all that – taking into account his horrid political and social views – his book – The Education of Little Tree – is still fantastic. So the question is – do we cast aside a wonderful book because the author is contemptible?

Let’s say To Kill a Mockingbird – a generally accepted wonderful book – was penned by Adolf Hitler. Would it still be a great book? If Torquemada wrote Huckleberry Finn, would we still revere it as a classic? If Stalin wrote Green Eggs and Ham would we still read it to our kids?

I’m no better than anyone else. There are television programs I won’t watch because I believe them to be ridiculous even though I’ve never seen them! Shows like Scandal, Revenge, the Bachelor and the Bachelorette and Mistresses (which I’ve been told is a rip off of a British show – probably called Slags or some such thing). I would have preferred that the author of The Education of Little of Tree be a good old fashioned hard drinking misogynist like the rest of the great male authors we all adore and respect but sometimes we have to take beautiful prose from wherever we find it.

If you won’t download The Education of Little of Tree because it isn’t the sort of thing you like, that’s fine. If it is the sort of thing you would like but you won’t hear it or read it because the author may have been a horrible human, I think you do yourself a disservice. Rumor has it that JD Salinger may have liked underage girls but Catcher in the Rye is arguably one of the finest books ever written – just ask almost any serial killer — they always have a copy on ’em. Catcher in the Rye isn’t Salinger. For Whom the Bell Tolls isn’t Hemmingway. They are the books that sprang from their mind and their souls and those same minds and souls that nurture such beauty can certainly house monstrous demons as well.

I bring all of this up because a discussion of some interest was started about is when I promoted the book on Facebook as a narration I was extremely proud of. When I heard all of the rumors about the author, I researched him and now I believe he was likely a rotten guy. He sure wrote a great book though and I remain proud of narrating it and I hope that you will give it a listen.
So there.
And now—-

NEWS FROM AROUND THE WORLD!

London, UK…YOU LIVE WHERE?
The Map of Vaguely Rude Places is now available from geotechnologist Gary Gale. It’s a world map with rude place names highlighted for your prurient enjoyment. Go to http://maps.geotastic.org/rude/index.php and click on the many flags to find wonderful places that you can move to…like – Twat, Scotland, UK or Vagina, Russia. Perhaps you would prefer The Cock of Arran, Scotland, UK or Weener, Germany. Maybe Slut, Sweden is the place for you or Dikshit , India. Perhaps a visit to Peniscola, Spain is in order. The US is well represented with names like Lower Spunk Lake, MN and Wankers Corner, OR. The Far East features Longdong Avenue and Fuku – both in China. So go to the map and plan a vacation! Perhaps we can meet at Shag Point, New Zealand. No idea what we’ll find to do there…
Indian River County, FL…HIDING DRUGS IN ALL THE WRONG PLACES
Jennifer Renee Crosby,42, was arrested for cocaine possession when a car she was a passenger in was pulled over for a window tint violation. Ms. Crosby was acting “oddly” and admitted she was hiding crack in – wait for it…wait for it… her vajayjay. Apparently the foil wrapper holding the drugs was irritating the skin wrapping holding her nether regions — “netherland” if you will . “Ow!” she reportedly said as she removed the foil packet. “I have really gotta get a wallet or something!”

Uxbridge, MA…THINGS TO DO ON A BRIDGE
Police are requesting that area residents please refrain from pooping off the Route 122 bridge onto the P&W Cargo Train that passes below. It isn’t the cargo the train was designed for.
“It’s disgusting,” said Uxbridge police chief Jeffrey Lourie. The police and cargo train company plan on charging anyone caught train dumping with any and all applicable charges. “We don’t know what we can charge em with outside of lewdness,” said a source, “but c’mon! We’re talking about crapdusting a moving train — there’s gotta be a lawyer who specializes in that!” 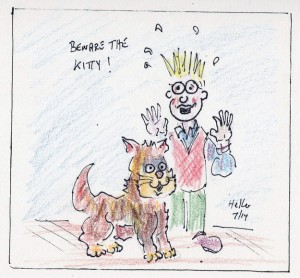 Kush, a 4-year-old Russian Blue cat was held for 10 days in detention/quarantine after he cornered his owners and trapped them in their bedroom. Teresa Gregory, Kush’s owner, told the 911 dispatcher that Kush had her and her husband James trapped. “She’s got us trapped in our bedroom! We can’t get out! She’s right outside our bedroom door. I don’t know what she’s going to do!” said Gregory.
Apparently nothing.
Gregory is unsure why Kush became aggressive but the cat was checked and found to be fine. While they have decided not to press charges against Kush, the Gregory’s are considering finding Kush a new home.
“Those bastards needed to be taught a lesson,” said Kush the cat. “Don’t mess with my Meow Mix! Don’t try to put a damn hat on my head to take cute Instagram pictures of me for your stupid friends! You liked these Planet of the Apes movies ? Wait till me and mine get together…we’ll go ape on you alright..bastards….”