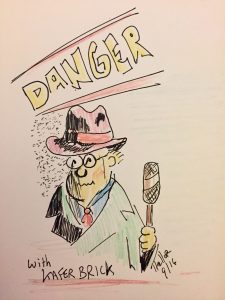 THE DANGEROUS BUSINESS OF AUDIOBOOK NARRATION

That would be my name if I was just starting out in the business today.  (I might still use it if anyone ever wants me to do a dirty book where I get to say “boobies” and “smooch” all in the same sentence. Maybe a nice title like “Winsome Booby Smoochers in Zombie Office Cubicles” or something equally romantic.)

Kafer Brick – audiobook narrator for hire. That’s my handle. You say you wanna be one of us? One of the proud, the loud and the hideously underpaid? Well, step into the gym – it’s gonna be a long punching session with the heavy bag. You’ll be the bag.  Lemme tell you all about it.

(Some people will say I picked the name so people would think I was Scott Brick’s illegitimate son or even his illegitimate pal; or that I was Jeffrey Kafer’s legitimate anything.  Some people would be wrong.  Sure It’s a made up name. But it’s not so I can trade on those guys’ credibility or success. It’s so I can dupe tired publishers who are overworked and sleepy-eyed from too many APA Mixers to believe that I am actually Scott Brick or Jeffrey Kafer and then I will get jobs that were supposed to go to them.  A scam? Absolutely. But don’t hold it against me. It hasn’t worked yet.)

It’s not easy work I do. I’m a detective – I search for the truth and then I share that truth with anyone willing to listen.  It takes dedication. It takes talent. It takes stamina. It takes a nice chair.  So far I’ve got a chair.

You’d think audiobook narrators never had to worry about safety at work. You’d think there was nothing that could hurt them on the job. What could possibly happen on a voice over gig that would be painful?
Well. I’m here to tell you that this is no gig for the weak hearted, jello-kneed, lily-livered la la actor who can’t handle a little adversity. And yes. A little blood.

First are the scripts. In the old days, we’d get real pieces of paper – fresh from the copy machine and I’m here to tell you that those babies were not only heavy but you hold em wrong and you’re looking at some pretty deep paper cuts. Cuts. Blood. Pain. From paper.  Simon Vance once lost enough blood to fill an edge of a small piece of tissue paper. Not enough to end his life, but plenty to get a fine DNA sample. If we needed one. So there’s that. If Simon Vance was ever a suspect in the murder of some nimrod fan with a computer and an Audible account, we’d have been able to find out for sure from the blood he left behind on his last gig where he had a paper cut.
I know! Pretty heady stuff.

Today scripts come in PDF formats. We have to download them onto our pads and those pads can be lethal. An Ipad tossed by…. say – Patrick Lawlor- tossed with gusto at Peter Berkrot could really hurt Berkrot. And even if someone isn’t throwing an IPad at you, they can fall down and break a toe or two. Very painful.

If you’re lucky enough to get to work with a director that means that you have at least two people working on the job and that can lead to disagreements. Say you get hired by Dan Zitt and he hires Paul Alan Ruben to direct and Ruben has a different take on the story than you do and an argument ensues. First, there’s the danger to your psyche when you realize you have no idea what Ruben is saying because he is using words you don’t know and he won’t slow down enough for you to find each word in your thesaurus. Then there’s the damage you can do by hitting him with the thesaurus. I know he looks slight, but Ruben hits back.

I know that I’ve yapped on about hypotheticals and what-ifs and could-bes thus far and its time I came through with the rough stuff. The unvarnished truth. From the files of Kafer Brick.

A few years ago, I was the voice of the Richard Castle books. It was an exciting time for me. A big series. Of course just before recording was to begin I managed to rip my left bicep right off my arm. Completely ripped. The bicep detached from the big bone that goes from the wrist to the elbow. The kind of bone you see mastiffs picking their teeth with. I’m no doctor but I think it’s called the forearmal bonal.  Anyway the bicep ripped off from it – where it had been happily tethered for a great many years – and shot back up inside my arm to my shoulder like it was a Venetian blind snapping shut. I would’ve thrown up but that always makes me vomit. Everybody else did though and that sort of thing can make you heave.

The doctors worked feverishly on me until I asked for some doctors who weren’t so sick with fever and had them patch me up. I expect you want to know if it hurt. If it hurt a real real lot. If it caused me to blanch with pain and break out with a sweat and stay right on the edge of being passed out for many months. Yup. It did. Hurt a lot. I was given pain pills. Not the ones that give you pain. The ones that make you so loopy you think you can hear Dick Hill saying “suck it up” or Nicol Zanzarella saying “shut up Nancy.”
Well this soldier did suck it up. I went to John Marshal Media and narrated that Castle book for a whole week with my arm in a Robocop sling and no pain pills because the pills would have made me too loopy to read.

So there! And you think this isn’t a tough job? Harrumph!

More recently, I was working with a group of actors on a project in lovely Portland, ME. After finishing our work, we gathered on a sun dappled backyard deck for lobster and beer and I started a round of the most dangerous sport of all – chatting with narrators. Laughing and sharing – pastimes that would make professional skyscraper flagpole cleaners weak with fear – were employed ruthlessly by the assemblage and we were utterly untouched by any signs of fright. Certainly a few of us were weary of telling an uninteresting story, of sharing a joke that falls flat – a special kind of hell, of not being listened to or – the worst of all pains – being listened to and not maintaining the floor.  Oh the horror!
At any rate, someone said something funny. Since I was sitting with Robert Fass and Neil Hellegers, I think we can all assume it was me. My chin went up and my head tilted back – as heads will when one laughs aloud – and the back of my skull slammed with a resounding crash into the wooden fence railing and I recall saying: “ouch. I wish I hadn’t done that.”

Once back in New York, I had a CAT scan. That’s when they make you go through a little radioactive donut and look inside your head. They tell the narrators that it’s totally safe but after they say that they leave the room and stare at you through a little window in a radiation free security hut.

Anyway they looked in my head… and found nothing. (insert joke here)

Testing and my general loopiness revealed that I have post-concussion-syndrome which means that all those things I couldn’t remember before, I can’t remember any better. You get post-concussion-syndrome when you’re a tough-as-nails narrator. You also get it when it’s your 6th concussion and your brain has had just about enough of your devil-may-care spit-in-the-wind narrator lifestyle.

So think about these things when you think about becoming one of us. Think if you have what it takes to look a script in the face and know you can beat it and break it into little pieces of theatrical truth and artistic beauty and send it to the masses naked and broken like a wild stallion or a really stuck jar of pickles.

I haven’t even covered all the perils that can creep into a narrators’ world – darken his dreams and crush his resolve. We’re talking bad backs from bad chairs. Really bad backs from really bad chairs that collapse during the climactic scene in chapter 8; Eye strain from small words on badly lit PDFs; Claustrophobia from small booths; Sweat stains on nice shirts from the heat in the booth; and the always dangerous “boom” mic – there is a reason it’s called that you know. There’s a myriad of problems thrown at us each and every day.

You still want to walk in our shoes? Throw a few rocks in your Hush Puppies, stroll a mile or two and then decide.  And when you’re ready – give me a ring. I’ll be in the booth – gritting my teeth and narrating through my pain because I’m an actor and that’s what we do.  Kafer Brick signing off.