GOODBYE 2022! HELLO PRETTY MUCH ANYTHING ELSE! ON PLANS, RESOLUTIONS, AND LENSA 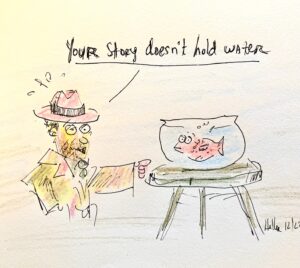 I’ve always wanted to write a detective story about a fish. Where the PI is a fish detective. Somebody – probably from the Branzino Family – gets whacked and our hero is asked to find out who did it.
The whole point of the story is so that I can have one fish – who looks like he must -absolutely must – be the obvious guilty party. He’s a fish, of course – a red fish with a sketchy background. He gets questioned. All the evidence points to him.

Our hero detective – Gill Lordfish – tries to break him and the guy seems like he’s on the hook but, toward the end of the grilling, Gill Lordfish knows he’s wasting his time casting in these waters and lets him go.
“Why’d you let him go?” Gill’s partner, Gillary Huber, asks him.
“He didn’t do it,” Gill says. “He’s just playing us. Did you see him? He’s a herring. A red herring.”

And that would be the whole point of the story. Apparently, I think that one joke is funny enough to justify 300 pages. Sadly, I just told you the point of the story so now, there’s no point in writing the Fish Tale.  (So much wordplay just lying there!)

That little segment just now was the appetizer for today’s blog. Now for the entrée. First, I want to apologize to my loyal fan base – both of you have been waiting ages for a new For the Hell of It. I can explain the delay and I think once you hear it, you’ll forgive me.

I am a lazy sonovabitch.
I’m glad we got that squared away.

Now then – let’s discuss a few things related to voice over, audiobooks, and whatever is on my mind.
Let’s begin with our end of the year review of the year we just spent. For many of us, it was a year best forgotten and it would be easy to do so were it not for those annoying social media memories and One Drive photos that pop up for no reason at all.
This year, I lost more people I love than in any other year I can recall. Over the years, the total has been greater, but no single year has been as tough on my Kleenex bill as this one. That makes looking at this year in review a bit problematic. I am biased. I hate 2022 and will be happy to see it go. I will watch A Night at the Opera and maybe Duck Soup – as is my tradition as I end each year -and instead of waving goodbye to it, I will flip it off.

On the plus side, I did over 50 books this year. I traveled with Sean Pratt – occasionally accompanied by Ana Clements, Joel Froomkin, and the lovely Jo Anna Perrin to Chicago, Austin, Orlando and we had a marvelous New England Narrator Retreat this year. I worked with many students and did many swell things that are already beginning to fade from actual real memories and turn into amazing tall tales that bugger the imagination. Or beggar the imagination. It’s your imagination – bugger or beggar as you like.

I should add that making New Year’s Resolutions is ridiculous. You can’t pick a random date on some calendar to correct all your flaws.  Most of us would need at least 2 days just to list all our flaws.
And even if we could “correct” everything, who would be? Certainly not us. We’d be some imaginary version of us that would have no connection to the real actual us.

You don’t need to change everything – start with a few obvious faults that you are aware of and work on them. For example, if you’re always late, take steps to be on time – set your watch back or start acting like everyone else is at least as important as you and your constant lateness is a sign that you don’t give a rat’s ass. Make a change – give a rat’s ass.

Maybe your big issue is that you’re too quick to anger. Recognize it and start practicing doing a 5-count or a 10-count before you react. Most of the time, the thing we think we are angry about is only a trigger for something much deeper. You may think you’re mad at the guy who cut the line at the movies, but the fact is that you’re actually mad at your Dad for leaving your family to go live with an albino lap dancer with a lisp and who has a nipple ring made from a Pontiac hubcap.
Go see a therapist. And count!

I think aiming to do different things or the same things better makes much more sense. I am not a life coach. I am not a trained therapist but here’s what I know: you should write down achievable goals and achieve them. You should not beat yourself up for what you didn’t do or for what didn’t happen but learn from what didn’t work and didn’t happen and don’t do the same thing the same way again.
We need to learn from our efforts that didn’t succeed. (Note I didn’t use the word “mistakes”. I’m not turning all sweetness and treacle; I just think too many of us are already too hard on ourselves.  That doesn’t mean that you aren’t making mistakes. You absolutely are. So am I. The trick is to notice it quickly and knock it off asap.)

RANDOM THOUGHT ALERT! – I’ve decided to write down thoughts that come to me when I’m supposed to be thinking of something else. You never know when you’ll accidentally stumble on the secret of the universe when you were supposed to be prepping a book on Medieval Haberdashers.
“This dirty cloth robe is all the rage! Everyone without the plague swears by it!
…everyone with the plague is – well! They’re dead, aren’t they??  Ah Ha Hah!  (- A wee bit of Medieval Haberdasher humor for you) – so, would you like a cowl to go with the robe? We have them in dirge, black, Sepia, and a decomposing flesh tone that is all the rage in Mesopotamia!”

Here’s my random thought:
Whenever a movie comes on some streaming service, and it says – “This movie is for mature audiences only”,  I always question myself.  I really don’t think I have what people refer to as a “mature makeup”. No one has ever said: “Go check with Johnny Heller – he’s kind of mature.”
I wish they would just let me watch a film without making judgements about my character and my ability to handle the subject matter. I only need to know 2 things – 1. does the dog die? – because then, I am out – don’t wanna see it. Not gonna watch it.
2. If it’s marketed as a comedy, is it funny? Will I laugh at all, or will I wonder why I am not selling script ideas every few minutes because a lot of comedy films of late are missing one super important ingredient these days – humor, comedy, laughs.

Anyway, that’s what just popped into my mind.

Now back to our regularly scheduled blog.
Here are some things to keep in mind for a better year next year:

I hear you from here – “C’mon! No one would do that!” But they would. And they have. And they will.

If you are going to make interesting pictures of yourself with Lensa, go ahead and do it. Is it AI? Yes. Do I think you should use AI to do silly things like show the world what you would look like if you were a futuristic warrior Queen or a sword-wielding Knight in King Arthur’s court?
No. Of course not.
But who cares? If it brings you joy and doesn’t hurt anyone, go do it. But realize that it does weaken your “I am against AI in audiobooks” argument. Because it shows that you are ok with AI when it’s used to make you look cool but you’re against it when it’s used to take work from you.
The key thing about all of these social media gewgaws is that most of them, if not all of them, are designed as data mining tools. Those games where you put little hearts or checks on the list of 50 places you may have visited or 40 things you may have done? All designed to aid advertisers to market to you and/or to gather information about you.  There may also be some legalese that says the company who made the app, owns the rights to the images created in perpetuity and can use the images anyway they like.  Then this could happen:
Say you’re Sean Pratt. You’re sitting at home with your family, after Church or more likely, a gut-busting slam fest in some BBQ joint, and see your face, your recognizable reasonably well liked Sean Pratt face on a Marvel super hero body dressed in tight lycra because, you needed to try Lensa – on TV in a local commercial for Lennie’s Leather Mask and Adult Toy Emporium.

Anncr: “Hi folks! Wishing you could afford ass-less leather chaps but too shy to ask about credit plans? Looking for that special gift for the man who has everything except a leather mask for the face with a pantload of zippers? We got that mask!
C’mon down! Look Captain Ginger likes it! “
And Lensa Sean, the Ginger Yogurt, is suddenly clad in a leather mask with a pantload of zippers.
And Sean’s family (made up here for sit-com purposes) speaks up:
His very Asian daughter (with no explanation at all for her ethnicity) : “Dad? Dad? – Is that you Dad?”

His gorgeous black wife ( probably Vanessa Williams and with no explanation as to how his family came to be and how come they live in such a nice house when no one ever goes to work or appears to have a job) :“Sean! I don’t think I have to tell you this – but you will not be in charge of stocking stuffers this year!!”

And Sean’s sitcom family will leave him for a different sitcom Dad – probably Matthew Perry. And Sean won’t get a dime from any of it.
He won’t even get a nice leather mask. All because he played around with Lensa.

Just remember -Tik Tok is a Chinese data mining company, FaceBook allows Russian data mining, and God knows what Twitter is anymore. Does that mean you should stay away? Not necessarily – but you might want to stop sharing personal information with the Chinese Ministry of State Security and the Russian GRU and above all, Don Baarns – who administers every voice over site on FaceBook and wields enormous power!

And don’t forget – plan on attending the Splendiferous Narrator Retreat March 28th, 2023! We will have great coaches, great fun, and a great location! We plan on having Scott Brick, Sean Pratt, Jo Anna Perrin, Amanda Quaid, Hilary Huber and more!