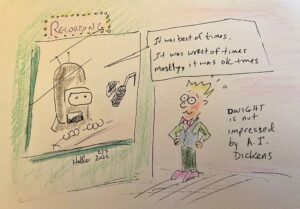 Well, it’s time to opine again. Some people wonder what makes me an authority on so many different subjects and the answer, of course, is – my world of experience, my being generally well read and my being reasonably bright. More importantly though, is the simple fact that it’s my blog, my website, my video channel, my computer, and my thoughts. I don’t always know whereof I speak but I certainly do know where I can speak! And it’s here – which is an incredibly lucky thing for you if you happen to be a fan of my work or a fan of my opinion on one thing or another.

Today’s opiniated piece is on A.I. and audiobooks. Or A.I. and acting. Or A.I and human interaction. Call it what you like – it’s about A.I.
To understand this blog, we need to define our terms. AI stands for “artificial intelligence.” In this case the words “artificial intelligence” should be taken to mean “fake” “horrible” “intrusive” “human being job taking” “piece of dicktoast” “engineered to save some fat cats some money” while “ripping off consumers” and “doing grave injustice to the art of acting” and to “humanity in general.”
Good! Now that we’ve defined our terms, we can have a wee unbiased chat about the smoldering plate of snail shit that is A.I.
As the more perceptive among you may have guessed – I am not a fan.

We have an Alexa that is never plugged in or turned on unless we want to hear some Motown or some such bit of musical wonderfulness. We don’t speak when the Alexa is on unless it’s to sing along to the music and we turn the thing off and unplug it when we are done listening. I don’t want our conversation to get back to Bezos and his horde of Amazonian overseers who will home in on our chats and bombard us with ads for Lucky Strikes and soda pop because the Alexa heard me say: “Pardon me for blowing a little smoke up your dress Jo. I was trying to smoke out your take on the caper and I thought a little moxie might do the trick.”

And not only are my own gadgets trying to con me, but there are companies out there that are actively using synthetic voices to do audiobooks. The companies say they aren’t trying to step on narrators’ toes – they’re just trying to get more books into the audio world. They insist they won’t be taking narrators jobs. My take is that they are being disingenuous at best and outright lying at worst. And my money is on their worst. Some of these companies are members of the APA and that should concern you. It does me.

Audiobook acting requires story tellers that understand the human condition, that appreciate the scene the author is extolling and the truth the author wants shared. They are conduits of the author’s truth to the listener; vessels that can set sail with a boatload of story and carry it safely to shore (I could go on with this lovely seafaring metaphor but I’m getting seasick).

An audiobook actor doesn’t necessarily have to be a trained actor, but he/she must be a brilliant storyteller. From my perspective, acting training can only help the audiobook actor.
A good voice alone won’t carry the day. In fact, A. I. may have a good sound and some of the best A.I. stuff I’ve heard is better than some the worst human stuff I’ve heard.
A.I. is not only coming, it’s already here. Will it take our jobs from us? It will take jobs away from the worst of us and it will take jobs away that don’t require much of us. But I don’t think long form fully connected storytelling can be done by a machine. Not yet, maybe not ever.
I object to any acting job that is given to a machine instead of to a human actor. Only a human actor can find and play human emotions, human desires, and human stories -which are all stories. It’s rare indeed to see a bunch of old coffee makers sitting around sharing tales about the good old days before Keurig coffee pods came along. And you never see old Hoovers telling sad stories about how all the dirt and dust humans leave behind is now sucked up by Dyson and the Australians. Nope. Only humans share stories. Only humans should tell them.

Machines are used all over the world and humans, therefore, have had to adapt their skills to continue to be productive and employed. Someone has to plug these things in after all. To stay relevant and employed, the audiobook actor needs to be good and continually work to be better. Too many narrators are too concerned about their new studio interface and new logos and not at all concerned with the fact that they aren’t particularly good storytellers.
You may have a wonderful website but if my toaster can tell a story better than you, my toaster is gonna get the job. (This, by the way, is highly unlikely as we have to keep the toaster in the closet as our Chow-Chow is scared to death of the thing and tries to leap out of our window every time she sees it. We haven’t had toast in years.)
I believe it will be at least a decade before A.I. can rival an actor in long form narration and even then, it will only rival the actors who aren’t that good at it to begin with. (My estimation of decent A.I. being a decade away is based largely on a number of facts I just made up and some totally unrelated charts that I saw in a college class long ago and don’t understand how to read.) I suppose some backlisted titles or titles that won’t see a decent ROI if they went to audio right now will be done by A.I. voices and some listeners may be fine with the fake voices. Of course, some listeners think voting Republican makes sense, so there’s clearly no accounting for taste.

Here is what I think you should do:

Look, if we have learned anything from futuristic Sci-Fi films, it’s that as soon as you allow your watch or your smartphone or any of your gadgets to run things for you, you will be killed by your blender while you sleep. So, let’s not pretend that A.I. isn’t a threat. It is. But it’s a much bigger threat to narrators who can’t tell a story to start with. And that’s something you can work on.

I, personally, am not looking forward to watching the Audie for Best Mystery Narration going to Phil Thron’s PC or the Best Female Narrator Audie going to Hillary Huber’s MacBook Pro. So, get to work, keep your eyes open and do some damn fine storytelling!