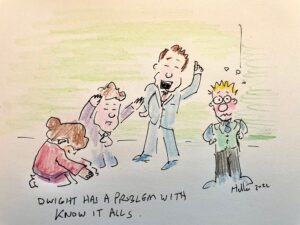 I’ve said it 1000 times…no. Wait. I don’t want to begin by exaggerating. I want to be as honest as possible here so – I’ve said it at least 9 times, likely more: The people you meet in the audiobook industry are some of the nicest, most helpful, and downright swell folks you are likely to meet anywhere.
And you can’t say that about every community. No one has ever said: “Congress! What a swell bunch of folks they have!”  “Divorce attorneys? The best!” “Gym Membership salespeople? Love em!”

Having said that, it must be pointed out that it isn’t true for every member of our universe. In every group you will find a certain number of ferndocks, dickfours, douchewallets, and weaselpellets. Wankers too. Let’s take a look at some of these folks by looking at what “type” of assnugget they are, pointing out some defining characteristics or behaviors and then considering how best to deal with them.  I readily admit that I might be considered a ferndock by some of you and, if so, I suggest you don’t hang out with me. I rarely hang out with me, and I like me! I can’t imagine how you manage it.

For purposes of this blog, I use the term “guy” – this should not be taken to mean that the following list of annoying oiks are only or always men. But men are more annoying in general, and the word “guy” is easy to use, and I am far too lazy to play the word gymnastics I need to use to make these examples universal. So, let’s pretend that “guy” – as I am going to use it – can refer to any gender, any age, any race, any anything. OK?

1. THE I’M BUSIER THAN YOU ARE GUY

First, to make sure they can make their point, that they are working and you aren’t, they need to see what’s up with you.

You: “Kinda slow. I sent letters to Tantor and Blackstone but so far – nothing. You?”
* Never say “you”? Never take the bait. But you will learn this, and you will know you made an error when they say:

Dickwaffle: “Really? They got right back to me! I got a 78-book series from Tantor, and Blackstone said they’d like me to read every book they get from now on!
But don’t worry, I’m sure someone will give you a book or a pamphlet or something!”

How to handle this:

Here’s when your success can bite you in the keester. Someone you know or don’t know (it doesn’t matter to them) will email, phone, text, call and say:
“Hi! I got your name from (insert name of someone you sort of know but don’t really have any feelings for or about) and they said you could help me.”

OR: “Hi! We haven’t talked since 3rd grade when I pushed you off the monkey bars and you had to wear a neck brace for a few years! Remember that?”
Anyway:
“ I have a great voice. Everyone says so and if I understand this right – you get paid to read books out loud, right? I mean, dude! What a racket! Am I right? So, I was wondering if I could buy you a drink or a cup of coffee and you can tell me how to do this gig. I figure if you can do it – – “
How to handle this:

Most audiobook/acting coaches have a body of work that shows prospective clients that they have experience in the field and knowledge to share. Some narrators I’ve met or heard about don’t feel the need to learn anything at all before sharing what they think they know. And charging for it.

Here’s where you’re talking to a new narrator, and they have to cut the chat short because they have a student booked. Or you’re talking about how best to create characters and they – veteran of as many as 10 titles – say: “I was talking about that to my students this week.”
It is beyond me how some folks actually believe they know a thing when they don’t. I have nothing against anyone becoming a coach. There’s always room for a good coach – one who knows the business & marketing and/or knows acting. One that can share the wealth of their experience with people anxious to learn. That’s great. I encourage that and I particularly encourage narrators from diverse backgrounds to start getting involved in coaching.
To coach before you are ready is doing a serious disservice to the industry, to your “students” and to other coaches who joined the ranks to share their knowledge. Most of them, of course, waited to get some knowledge first.
This isn’t like taking lessons on the bass guitar! (This last line is a joke aimed at and for musicians. If you get it and laughed, I’ve done a good thing. If you don’t and didn’t, just read that other stuff!)

This is my least favorite of all. Here’s when you have a friend or acquaintance – usually on social media but you may have met at a function or two and you may think they are nice and knowledgeable and other swell things, but they almost always have an agenda that includes making themselves seem important at the expense of your feelings and general well-being.

Here’s the kind of stuff that happens:

When you get excited about a new publisher who reached out to you, they will inform you that they were somehow responsible for the job offer. Or worse, they will tell you that you only got the gig because so-and-so was unavailable and that you probably won’t get many more gigs like that.
They will tell you things that other people said about you -especially if the things aren’t very nice. They will follow it up by saying that they would never ever talk about anyone like that and then they will spend 20 minutes talking about some 3rd person just like that.

(Chances are that the things they say were said about you were never said at all. Or were things that they said but attributed to someone else.)

They will post on social media about things/movements/politics of the moment, and they will declare themselves the expert on all of it. Which is fine if they actually have any direct knowledge or involvement in the issue. Not only will they alert you to their novel and perfect take on the thing, but they will declare the way you are supposed to feel and respond to the issue as well. You must mirror their feelings and their response, or something is wrong with you.
It’s hard to be “friends” with people like these. So don’t be.

I hope that you don’t have too many run-ins with any of these types, but I suspect you will. I think you’ll find it helpful to have a good relationship with another narrator that is grounded in mutual respect, admiration, and real affection. Make that person your accountability buddy and your confidante and whenever you encounter one of the gnarly dungpatties I mentioned in this piece, get on the phone or get together and start dumping on them! Let it out! Giggle and chortle and snigger about what a beastly oily unctuous dickblister that person is and go on about your business of being great.

AND NOW…COMMERCIALS!:
Join Sean Pratt, Jo Anna Perrin and me in NYC August 20 & 21 for a phenomenal Audiobook Workshop!
Join Sean and me in Austin, Texas Sept 17 & 18 for a different but no less phenomenal Audiobook Workshop!
And join a bunch of swell coaches and damned fine publishers for our New England Retreat October 24-27!
Go to www.johnnyheller.com and click on the Workshops Link for more information!

AND NOW…MORE FROM MR. ANSWER MAN!
(Send your questions to Mr. Answerman in the comment session of this blog or contact Johnny Heller at [email protected] and your question will be looked at and, very likely, completely ignored…but you never know. Mr. Answerman certainly doesn’t.)

DREAMER IN PENSACOLA:
Why can’t I remember my dreams when I awake? In my dream last night, there was a dance going on and there was a little red ball moving about the highly varnished dance floor and we were supposed to dance where the ball went – kinda like a moving twister game. Anyway, I was dancing with this large woman with beautiful legs. Her name was Wanda, but she wasn’t someone from my real life. She was just totally fictitious. So, we were dancing all over – following this red ball and suddenly a herd of ravenous badgers started attacking Wanda. I’m not sure what a group of badgers is called. But they were really going to town on Wanda, and she was laughing hysterically!  And then something momentous happened but I cannot remember what it was. It’s gone. I spent all night having this dream. I spend all my nights having dreams and they seem, as far as I can tell, to be wonderful dreams – fantastic stories with amazing twists and turns. But I can’t remember a single one. I bet these hours I am asleep are the best times of my life, but I can’t remember what happens! Why? It’s driving me mad.
I wake up because I have to go to the bathroom, I get back to bed and I cannot get back to my dream. I can’t recall what just happened. What is that about? I tell you I am going to go insane!!! HELP!

Dear Dreamer: A group of badgers is called a “sete.”

Did you watch the new Dr. Strange movie? I did. I really like Cumberbatch and I really wanted to see him do something after that horrible Power of the Dog flick – did you see that? Prolly not. No one did.
But everyone watched this new one. I don’t like to come across as stupid or anything, but what the hell was going on? What happened? Who is anyone? And where did this flick leave us – in the Marvel Universe, I mean?
I watched it and I gotta say, I have no idea what I saw. I’ve seen every Marvel movie so far but this one, I dunno. Did I miss something? If you ask me what this movie was about, I’d say: I have absolutely no idea at all, but it cost me 20 bucks.
What do you think?

Dear Dr. Strange in Glen Ellyn: A group of badgers is called a “sete.”

Why does anyone need an assault weapon?

Dear Disturbed in Topanga Canyon: I can only guess – to quickly kill a sete?

Well- that’s all we have time for today! See you next time! And remember these important truths:
– When you die, it’s best to die like my great grandmother – who died peacefully in her sleep; not screaming – like all the passengers in her car.
And, finally:
If I’ve offended or caused harm, I apologize. The last thing I want to do is hurt you.
…it’s on my list, it’s just the last thing.