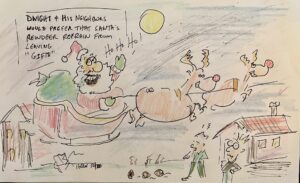 Ho Ho Ho! It’s Christmas time! The time of year where we plaster garish gee-gaws all over our halls and walls and have a tree killed and brought to our home so we can watch it die in our house. We hang ornaments and lights and inedible popcorn on our dying tree in an effort to ignore the fact that we are participating in ancient pagan rituals.

Christmas is a time of joy, of laughter and of realizing why we moved away from our families in the first place. In many towns, people hang hundreds of thousands of lights on their homes and compete for which house has the greatest show of energy waste in the universe. The Christmas lights ensure brightness all night long and help criminals avoid tripping over tree roots as they case your house.

But how did Christmas start? Where did Santa come from? What’s the deal with the ugly sweaters?
I am here to tell you the real story – much of which, sadly for you, consists of me making stuff up – but after 4 years of Donald Trump, you should be used to being lied to. So here goes:

Christmas is December 25th because that was already a big-time pagan celebration and July 4th was already taken. There is no Biblical mention of a Jesus birthday party which is really a sad thing. 12 guys following you every day, and no one even sends a card? No Apostle said: “Hey! Let’s throw Jesus a birthday party! Anyone know the date?”
“Dude, I don’t even know if it would be BC or AD.”
It’s likely that Jesus was born in the Springtime but Pope Julius I picked December 25th because Pagans already had a party then so it worked out in terms of hall rentals and party supplies.

The Three Wise Men were guys who brought gold, Frankincense, and myrrh to the baby Jesus. This codified an ancient ritual of the wealthy giving their best stuff to the poor. This practice mollified the poor and kept the rich from being beaten to death by gangs of pissed off poor people.
“Here. I got you a nice watch. Don’t kill me. Merry Christmas!”
Incidentally, frankincense is an oil used to cover the scent of the dead in ancient times and myrrh – another ancient perfume which makes sense when we consider the whole being born in a stable thing. The gold suggests that the stable story isn’t true because if you have gold, you don’t have to stay in a stable… but a good story is better than a true story!

What of Christmas trees?

In ancient times, people partied to ward off winter. They would burn huge logs and party as long as the log burned – often for 2 weeks. They thought this would appease the Gods who would then grant them an early Spring. Today we have office parties. It’s exactly the same idea. We don’t burn logs, but we do cut down trees and bring them home to decorate them. These were living trees which, until we cut them down, were perfectly happy in their forest. Good thing they aren’t Ents.

What about Santa?
Many people believe that Santa exists only to keep Scott Brick entertained for a few weeks but there is much more to the story. The original Santa was a Turkish monk named Nicholas who gave away his wealth and was, apparently, a nice guy. He became a Saint after his death – which is likely why more people don’t shoot for Sainthood – it’s low paying and you need to be dead.  He is considered the patron saint of children and sailors – which sounds like a weirdly uncomfortable combination to me. I mean, children and swing sets – I get. Sailors and boats -okay. But kids and sailors? I dunno.
The Dutch called him Sinter Klaas – which became Santa Claus because no one can speak Dutch. (Even the Dutch can’t tell themselves from Swedes). Later, various authors wrote stories about his flying reindeer, his late night visits through home chimneys (which must be disappointing to kids with no fireplaces in their homes) and naughty and nice list – which the ACLU has an injunction against.

Say there was a holiday that involved giving gifts; say you own a store that sells stuff that could be considered gifts. See? In the mid-1800s, a store featured a giant Santa statue that drew thousands of kids. It was a short jump for stores to feature in-house Santas who suggested parents buy their kids gifts in the store while the kid sat in the fat stranger’s lap.  Who could say no to that? Miracle on 34th Street indeed. Today Christmas ads start in early June and feature rich people buying each other Lexus automobiles or stuff from Kay Jewelers. The less fortunate save up for Hess trucks because what says, “Merry Christmas!”  better than an oil rig?

All in all, Christmas is the most celebrated holiday in the world – except in the Trump White House where Melania is in charge of the decorations and Trump dresses as an orange Santa and Ivanka forces kids to try to sit on his lap without rolling off as he orders them to bring him gifts.  Thank God that part of Christmas is ending and we can go back to shopping on line to get presents we feel obligated to give to people we are happy to see – but only once a year.

Regardless of your religion or lack of religion, you are a human being and you deserve to feel the warmth of the original spirit that started Christmas. You deserve happiness and you deserve joy, and you can find that best by bringing it to others. So, don’t get all hung up on small issues like the use of the Oxford comma, what became of Jolt Cola or how to forgive your family for voting for Trump. Just bring happiness in whatever way you can and have a very Merry Christmas and/or a swell holiday season. It’s all good if you make it so.