SHOT ALL TO HELL by Mark Lee Gardner from Harper Audio 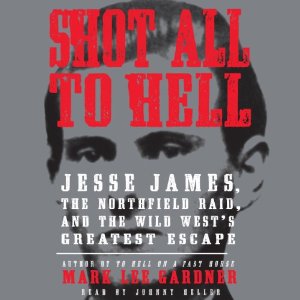 “Narrator Johnny Heller’s tough, weather-beaten voice lends itself wonderfully to this crackling audio tale of derring-do featuring the most famous outlaw in U.S. history. The September 1876 bank robbery in Northfield, Minnesota, led to the end of the James-Younger gang, a story that involves townspeople who took justice into their own hands. Heller narrates with authority, and although he doesn’t use a wide range of voices, his delivery is animated enough to make the story come alive. He varies his pitch to create characters that are more suggested than confirmed. He does his best work while using his natural voice to paint images of a bygone era in the American past. ” – AudioFile Magazine