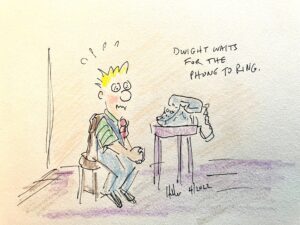 In the world of fortune telling, there is a thing called tea reading. It actually has a name: tasseography – you could look it up in your encyclopedia.
If you don’t have access to encyclopedias, you might have to google it. Tea leaf reading comes from China. You likely guessed that because it sounds all mystical and inscrutable and also because China is where tea comes from. Chinese tea was introduced to Europe in the 17th century. Tea was most welcome.

“Hallo! I’m tea!” said Tea. “Hallo! We were just saying how nice it would be to have a hot beverage to drink almost every single waking moment! What wonderful timing!” said Europe –mostly the UK though.
And that’s what happened. The upper classes would sit around drinking tea made with loose tea leaves and they would chat about gardens and scones and crumpets and who was doing whom while pretending they weren’t doing anyone and being all Downton Abbeyish. After a bit, the gossipers noted that they could see things in their tea leaves, much like non-tea drinkers can look up at clouds and imagine that they see things. Surely, you’ve looked up into the sky on a summer’s day and said: “Look! That cloud looks just like Darth Vader!” And your friend would look and say, “Which one? The one that looks like Elihu Root?”

And you would say: “It does look like Elihu Root! Why I had no idea that Teddy Roosevelt’s Secretary of State looked so much like Darth Vader.”
And your friend would say: “Clouds are cool. Fancy some tea?”
But I digress.

Anyway, the European tea drinkers soon noted that they saw their futures in the tea leaves at the bottom of their teacups. The Chinese saw the same thing! Tea leaf reading was generally passed down from one clairvoyant woman to another and these clairvoyant caffeine addicts would go from house to house and read people’s tea leaves and tell people their future based on what they saw in the tea leaf pattern. Mostly, they saw Elihu Root.
What, you ask, does this have to do with me and my audiobook career?
Well, I answer, have you ever wondered why you get consistent work from a publisher and then, all of a sudden, you don’t?
It is much more common than you might think. WHY AREN’T THEY CALLING ME? WHAT HAVE I DONE? IS MY PHONE BROKEN? IS MY EMAIL HACKED?
What does it mean? What does it mean when you do 3 books in a row and then you don’t hear a word from them? Have you irked them? Have you been replaced by an actor who works for less than you? Have you lost your mojo?
You need to be able to read tea leaves to figure this out. (See? There was a point to my tea leaf story!)

I asked some publisher friends why actors may not get work from them even if they have worked for them in the past.

2. You are a fine narrator, but you turn your projects in late. Being late is like tossing a burning cigarette onto the ground in front of Smokey the Bear. The Bear will bite your head right off. And he’d be right to do so. If you are going to be late, you need to let them know immediately and you need to be sick or dead. If you are frequently late, I can tell you without looking at your tea leaves that you won’t get hired again.

3. You may be assuming that you are on their mind because you are working with them. You aren’t. Once the book is assigned, they don’t, in general, think about it until it’s due. They are moving on with other projects trusting that you are doing the job they gave you. When the gig is done, you need to reach out to find the next gig. That means telling them when you are available.

4. This is not a business that allows you to ever stop marketing. There are 40 gazillion books and 60 gazillion people who think they should be recording them. If you aren’t reaching out, you’re playing hard to get and if you play hard to get, you won’t get got.

5. You are not getting hired because you have been posting how booked you are on social media. There is a thin line between happiness about new gigs and bragging so much that publishers, who are also on social media, think that you are too busy for them to hire you. When you post in April that you are booked until September, you shouldn’t be too surprised when no one seeks to hire you. Be as busy as you like but don’t leave opportunity behind in favor of bragging rights.

6. It is rare that you aren’t getting hired because you did something amazingly horrible and just ruined your relationship with your publisher, but it can happen. If you have done something so offensive that you are no longer hirable, you’d know it. If you punch a casting director in the nads, he’s going to be upset with you. If you insult her integrity, she will react. She will say: “Hey! That’s my integrity you’re insulting!” And, by then, it will be too late. You’ll be lucky to get a job reading tea leaves.

The main thing to remember is that your career is yours to build and nurture, and it’s important to do good work, be on time, and -above all else – don’t be a dick.

And now, some commercial messages:
April 22/23, Sean Pratt and I will be presenting an audiobook workshop in Chicago! Details for this event are on my website – cleverly named: johnnyheller.com

April 30, Tom Dheere and I will be presenting a VO workshop in NYC. Details are at VOStrategist.com

May 21 & 22, Sean Pratt, Jo Anna Perrin, Joel Leslie Froomkin and I will be presenting an audiobook workshop in Orlando. Details are on my site.

And we will be doing the New England Narrator Retreat October 24-27th so mark your calendars!

And I will be presenting at MAVO 2022 in Washington DC Nov. 11-13. Details at midatlanticVO.com