THE POSITIVE SIDE OF “NO” 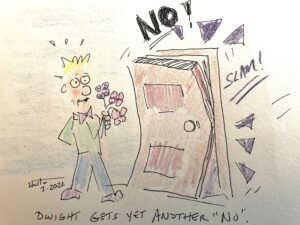 When I was a boy, back in the early 1800s, I would hear “No” fairly often. The big NO-slinger in my early days was my Mum. A lovely British lady who was pleasant enough – – until I asked her stuff. I would say: “Can I go with my friend to the ancient farm next door and play on the old rusting equipment with all the spikey things that will very likely impale one of us?”
And she would say: “No. Of course not. What are you, a bloody idiot?”

That is entirely possible, I would think to myself – because it was very likely that I was a bloody idiot. Lord knows I grew to become one so I suppose there must have been signs of it early on…
Later in life, in my futile attempts to get her to say YES, I would ask different questions.
In my neighborhood, the village hired a bug guy during the summer. He would drive his truck up and down the streets and he had this noxious gas that would kill all the mosquitos and other icky bugs. We kids, being – for the most part – idiots, would run behind the slow-moving truck – right in the middle of the gas cloud. The guy who could run the furthest before stopping to puke or to pass out on the side of the road would “win”. Of course, winning involved nothing more than passing out last or puking the least but still – a win is a win. Local parents frowned on the idea of kids doing this sort of thing and most of them had no idea that anyone from their gene pool would ever be stupid enough to even think of such a moronic thing to do.

(There were no helicopter parents in those days and kids weren’t forced to pick their college majors and work for a scholarship starting on their 3rd birthdays. Most of us didn’t think about college until the summer after we graduated from high school. This, of course, might have been a product of the bug guy. A guy we never saw and referred to -reverently – only as the “bugaboo man”.

So, I would stroll by my Mum, and I would muse aloud – “Hey! I think it’s bugaboo night! I’m worried that some of the neighborhood kids might chase after him. Want me to go outside and make sure they don’t do that?”

And my Mum would say: “No. Of course not. Do I look like a bloody idiot?”
Eventually I learned to stop asking my Mum questions. Happily for the universe, every other female in my life took over her job and told me NO many many times.
“Wanna go to the movies with me?”

“Wanna go to the school dance with me?”

NO
Then I went off to college in an effort to hear NO from people I hadn’t met yet.

For a short window of time, I had a chance to be almost anything I wanted to be. This will shock you, but I had a 4.0 grade average in college for my first 3 years. I passed the LSATs with flying colors and was clearly heading for a successful career as a douchebag lawyer in some big firm. But alas, I wanted to be an actor. Apparently, I was secretly in love with the word NO. Because no one hears that more than an actor.
No one.
The thing is, not too many actors ever say it.

We try so hard to get a job, that we never want to say no to one. And, sometimes, we need to. We need to learn the power of NO.

Whether you audition for a gig or you get offered one, it’s up to you to see if the gig fits in your schedule. It’s up to you to determine if the money is good enough, if the post will be done by the publisher or if you have to do it, if the genre is one you want to work in. There are a lot of things to consider after you get over the fact that someone wants you!

It’s wonderful that someone other than your mom recognizes your talent but not every job is a good call. Let’s say you get offered a 700-page sci-fi romance erotica novel about space aliens coming to earth to mate with MacBook Pros and you are uncomfortable with nonconsensual computer sex specifically and alien butt probes in general. You have to say NO.
Let’s say some slimeball AI company wants you to read a long book just so they can use your voice to make 3000 AI books – none of which you will be compensated for. They offer a decent rate for the one book, but nothing for stealing your voice in perpetuity. You must say NO…and, if possible, pop ‘em in the nards for even asking.

And what if you’re just too booked up and you know you can’t get the book done by the due date? You must say NO.
Here’s a note on that: when you are offered a book, make sure you ask about the due date. And if you are too busy to make the date, ask if there is any leeway in their schedule. If there is, your NO may become a YES! But – and this is important – NEVER be late if you can possibly help it and never say YES when you know it should be a NO.
It’s okay to say -NO. Be polite about it. Thank them for the offer but tell them why you can’t do it – if you are too busy, they will think that other publishers are working with you so you must be good, and they will come back. (Have you ever noticed how easy it is to find a job if you already have a job but when you don’t have a job, there seem to be no jobs at all? This is called “life” and it’s horribly unfair and bizarre but, in my experience, it’s better than the alternative.)
If you have to say NO because of your busy schedule, give the publisher some open dates that you can work for them. Tell them, I can’t get this done by your date, but I am open for projects in about a month if you have anything.  They will not get mad at you. I promise.

Publishers have lots of books and if you can’t do one, they will give it to another actor, but they won’t cross you off their list! – they will appreciate that you didn’t BS them. They will appreciate that you didn’t say YES and then screwed them over by not getting it done because you should’ve said NO. Saying YES when it’s a NO will earn you enmity and condemnation. (And while those are lovely words to say aloud, they aren’t good nouns to own.)
If you are uncomfortable with the subject of a book, that’s a NO. But tell them you are declining because of your discomfort so they don’t offer you the same stuff later. Tell them that you are uncomfortable with books titled: “My Horny Amish Rumspringa” so they don’t offer that sort of thing to you. If you refuse to narrate books about the sexual exploits of professional shuffleboard players or books about photosynthesis, let them know and be honest and professional enough to say NO to books you will not narrate.
You can also say NO if the rate is not right for you. Too often I have heard actors say: “I’m doing it for a low rate because I’m new and need the experience.” Nonsense! There’s a SAGAFTRA minimum and, unless it’s a royalty share, that’s your MINIMUM rate. An actor doesn’t get paid one rate for his first matinee show and then a higher rate for the same show later that night because he’s suddenly experienced. Sure, there are different rates for different actors, but you must say NO to any offer that isn’t at least the minimum. You know what “minimum” means, right? It’s a decent rate, but it’s the lowest they can offer you. If you think you are worth less than the least someone can give you, then you ARE worth less than the least someone can give you. And how sad is that?
If you want $250 pfh, you must say no to an offer of $75pfh and an old Fun Size Milky Way bar from last Halloween.
Also, what’s fun about those little, tiny candy bars anyway? I think we should be saying NO to them too. I mean as long as we’re saying it anyway…

So, what have we learned? We learned that saying NO doesn’t make you a bad lil’ actor- it makes you a professional with enough dedication to the craft and to the business to turn down work that you can’t or won’t do for professional reasons. And that’s how you turn NO from a negative to a positive and build a reputation as a savvy and professional actor who understands the needs of publishers. Remember, you don’t want to be a problem for any client. You want to be their problem solver. Saying Yes, when you should’ve said NO will only hurt your bottom line because it will definitely bite you in the ass.  So, the takeaway is: Don’t get bitten in the ass.  Unless you like that sort of thing. And for me, that would be a NO.