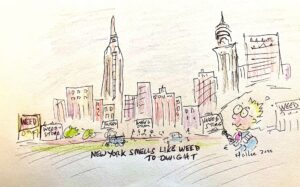 Let me begin by saying that I am not 100 % certain about the dates or times of the events I am about to share with you. I am trying to give you a heads up on stuff so you can make some plans – or plan to make some plans as soon as you hear more from people much smarter than me (the list is extraordinarily long).

I’m also going to share some New York City history and try to give you a feel for New York City – even though a great deal of what I am going to reveal is utter balderdash and complete flummery.

It starts with a keynote speech from someone that you’ve been dying to see or never heard of. In any event, I have never shown up in time to see a keynote speech in any APAC I’ve ever attended.
After the keynote, the day is wonderfully and cleverly scheduled by hard working staff at the secret APA headquarters-probably in an unused garage in Belgium. Everything is clearly marked on a handy schedule, making it possible for me to avoid attending any panels at all! while allowing me plenty of time to beat the lunch line.
These days, the conference seems aimed toward newer narrators. Still, you can learn a great deal. Especially if you don’t know anything to start with.
I mean this – from my heart – you should go to this conference. No matter your experience level, there is a lot to gain. The most wonderful thing of all is meeting your fellow narrators and meeting the talented folks who cast the books. They are there. Go meet them!
This is a day to schmooze and meet and greet and make contacts.
This is a worthwhile event, and you should go to it and meet people. There is generally a welcome mixer the night before which is a “MUST ATTEND.” I might even rejoin the APA just to go. (Although I’m not sure if APA membership is required to attend.)

A bit of history: APAC was held in New York City forever because it coincided with the Book Expo, and both were at the Javits Center. It was perfect. Publishers were in town to meet authors and buy books. Everybody in the book business was here so narrators, who need books to narrate to avoid those long quiet moments in the studio, flocked to NYC to meet everyone and the APA decided to have a shindig and it just worked out. Now, the Book Expo is a thing of the past, but this event lives on and, I hope it always will.

This event started in 2015. It’s not the place to meet publishers. It is designed to give narrators of all levels, opportunities to up their game and hone their craft.
In 2023, we are looking at a March 28th date and we hope to use our usual space at Baruch College at Lexington and 25th.  Last year, we did this event over zoom and it was wonderful, but to be honest, I so look forward to seeing you again in person!
We have panel discussions, Q&As, and we do a lottery to have some actors read with top coaches. You get breakfast and lunch, and tons of advice and knowledge are bandied about and a whole cargo ship of narrator community love is shared.
Because this is my event (you can tell by the name) I don’t want to brag but I must admit that it has been a highlight for many narrators. You can pretty much count on Scott Brick, Simon Vance, Hillary Huber, Paul Ruben, Sean Pratt and more. We work to organize panels that match the narrators’ needs. And, for certain sure, we will get you out in time to get all fancied up for the Audies. We may even end it at 4pm so you can rest up. We may even do it on Sunday!

This will take place on Tuesday, March 28, 2023 – a very busy day!
First, to quell controversy, I have been asked not to use the name “NAUDIES” in connection with the similarly named awards ceremony. Jeffrey Kafer, Melissa Exelberth and I started this party in 2013 and it’s always been called The Naudies. Always.
We decided that since so many narrators were in town and not all of them were attending the awards ceremony (note how I avoid using the official name so as not to suggest any connection), it would be nice to have a place to gather. As a fellow who just so happens to know a number of swell gin mills, I found a bar that was happy to have a murder of narrators and a pride of us came. Since there was no real “after party” for the awards crowd, they came to our bar afterwards and the boatload swelled to a Cruise boatload.

The last few years, we have been well hosted at Connelly’s on 45th off Broadway. Everyone can come in their casual wear around 7:30pm or so and eat, drink, and mingle. Later, after the awards have been determined, the tuxedo & gown crowd joins us, and we party til the wee hours.

Time for some FAQs!
1. Is it crowded?
YES

I do not make a dime on this. Even though we bring in more than 100 people every year, Connelly’s gives no loot to me, Jeff or Melissa. Nor do we ask for any. This is a chance to do a good thing and provide a place for everyone to be together and that’s all we ever wanted.

This is a seriously fun event, and I am delighted to announce that I’ve already reserved our space at Connelly’s.
And as for the APA not wanting to be connected, that’s fine. I totally understand. It’s not a problem. Every member of the APA is most cordially invited to join us and if they do their presence in no way suggests an acknowledgement of, or an association with the shindig.
And let me make it even clearer: THIS EVENT IS NOT SPONSORED BY OR ASSOCIATED WITH THE APA IN ANY WAY AT ALL.  It’s simply a party space that I have arranged so we can all gather to have fun together. No other point, purpose, or intention. We are going to meet in a bar. Sometimes I go to the Awards ceremony myself, and I show up late to my own party – it’s fine.

Wednesday March 29, 2023.  THIS DATE IS NOT CERTAIN!
Yep. The dreaded day after. This workshop is geared to help the narrator with the business end of the business. We talk taxes, work plans, workflow, better habits, marketing and so much more. Scott and I bring in industry experts in dozens of areas and let them tell you what you need to know.
This is a must attend no matter how hung over you are. Or I am.
A highlight of the day is the live panel of mostly lively audiobook casting producers! We gather together producers from PRH, Dreamscape, Podium, Oasis, Blackstone, MacMillan and many more and you get to ask them questions! And many have been known to answer.
While there is a perfectly sane argument to be made that we are insane to hold this event the day after the party and the awards, we need to act fast while everyone is still in town. It’s possible that we might do it one day later, it’s more likely that we start it later in the day. We will keep you apprised but you must attend!

And now, some notes on New York City so that you will have a swell time here.

New York is divided into geographic areas and districts. The important districts for your visits are these:

There are many other districts, areas, and sections to visit, like Chelsea, Chinatown, Little Italy, Koreatown, Greenwich Village, SoHo, NoHo, and HoSoNoHo! What Have We Here? There’s the Bowery, Alphabet City – lots of places and then we add in Brooklyn or Queens and there simply isn’t time to see it all.

The main things you must do include museum visits, theater, amazing food and, of course, no visit to the big Apple is complete without making sure you buy some weed in the local weed store, from the local weed truck, the local passersby or from the nearest vape shop. Weed is now legal here and we’ve replaced the odious smell of cigars and unwashed oiks with the sickly-sweet scent of dope. Is it an improvement? It all depends on your perspective – which will likely change once you’ve tried the weed or gotten a contact high strolling through Soho.